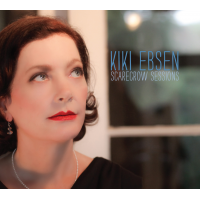 Scarecrow Sessions, due September 30, is comprised of standards and songs associated with her father’s showbiz career; “If I Only Had A Brain” is the No. 2 most added radio single this week.

Calabasas, CA: Singer-songwriter Kiki Ebsen stubbornly refused her famous father’s repeated suggestions to learn how to sing jazz standards. Rebelliously she insisted upon forging her own path as a solo artist and accompanying keyboardist-vocalist with a bevy of A-list pop stars. Eleven years after the passing of her dad, actor Buddy Ebsen, Kiki will pay tribute by releasing exactly the type of collection he fervently urged her to record, “Scarecrow Sessions” on September 30 on the Painted Pony Media label. The material comes from The Great American Songbook, a stunning original (“Missing You”) penned by the song and dance man turned movie and television star, and songs associated with his career, including an ill-fated starring role in “The Wizard Of Oz.” The first single prefacing the acoustic jazz set produced by David Mann, “If I Only Had A Brain,” is the No. 2 most added radio single this week.

“We are losing the iconic talents many of us grew up with. By recording these songs, I hope not only to honor my father’s memory and his love of jazz, but to create a musical statement that is truly my own. I’m connecting his past to my present in a way that will no doubt leave me forever changed,” said Ebsen, who completed the album as a Father’s Day offering after a successful Kickstarter campaign. “Through this journey I have discovered my voice. A simple yet beautiful tone that emanates from a true place in my heart; a place of lightness and ease.”

Front and center throughout the collection is Ebsen’s classically-trained voice that sounds like it was born to sing jazz - warm, elegant, supple, pretty and passionate. She recorded in New York City finding inspiration while strolling the same streets that her father roamed during his Vaudeville days. Ebsen is accompanied by a first-rate ensemble featuring some of the Big Apple’s best players such as Chuck Loeb (electric and acoustic guitars), John Patitucci (acoustic and electric bass), Henry Hey (piano and organ), Clint de Ganon (drums) and Mann on saxophone and flute. Live strings add grace and emotional depth to the proceedings.

“Scarecrow Sessions” takes its name from a little known story of Hollywood heartbreak. Buddy Ebsen was originally cast as the Scarecrow in “The Wizard Of Oz,” but yielded the role to Ray Bolger while agreeing to play the Tin Man instead. However, Ebsen had a toxic reaction to being cloaked in tin from head to toe with his hands and face dusted in aluminum that caused severe breathing problems when his lungs became full of metallic particles. He was unable to get enough oxygen into his bloodstream and ended up hospitalized forced to breathe with the aid of a respirator for several days requiring him to relinquish the role.

Songs on “Scarecrow Sessions” with much happier Golden Age associations are “Moon River,” in which Buddy Ebsen played opposite Audrey Hepburn in “Breakfast at Tiffany’s”; “At The Codfish Ball,” which Ebsen originally sang and danced with Shirley Temple in “Captain January”; and “St. Louis Blues” from Ebsen’s first motion picture, “Banjo On My Knee,” in which he starred alongside legends Joel McCrea and Barbara Stanwyck. Kiki Ebsen unearthed the yearning torch song “Missing You” when sifting through a box of her father’s old scripts and songbooks after his passing. She began performing the arresting piano and voice confessional co-authored by her father during her own shows producing chills as she felt his presence thus it was a natural selection for the album salute. The liner notes booklet inserted in the CD packaging contains photos from her father’s storied career, intimate family pictures and personal remembrances.

On her five previous solo releases, Ebsen preferred to interpret her own musical journey via self-penned material that has been well received. She has toured and performed with an extensive list of hitmakers that boasts Al Jarreau, Tracy Chapman, Boz Scaggs, Christopher Cross and Chicago while her songs have been covered by contemporary jazz chart-toppers Boney James, Eric Marienthal and Jessy J. After performing in Laguna Beach, Calif. this weekend, Ebsen jets to the United Kingdom for a series of shows this month before returning for additional Southern California dates in September ahead of the album release.