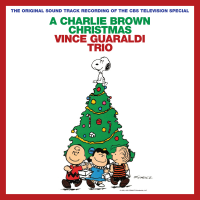 LOS ANGELES, Calif. — Vince Guaraldi’s A Charlie Brown Christmas [2012 Remastered & Expanded Edition] will be released by the Fantasy label in time for the holidays. One of the most popular and beloved holiday albums of all time, the multi- platinum-selling original soundtrack recording was a Library of Congress National Recording Registry inductee on May 23, 2012 and a Grammy Hall of Fame inductee in 2007.

When Guaraldi’s Charlie Brown Christmas album was inducted into the Library of Congress, the Library’s media release noted, “A Charlie Brown Christmas introduced jazz to millions of listeners.” According to annotator and Guaraldi biographer Bang, “The importance of [that] sentence can not be overstated.” Children all over the world who had resisted jazz as the music of their parents were given an introduction. Berkeley-based Fantasy Records wisely released a soundtrack LP of the San Franciscan pianist’s work on the show. (Completing the Northern California scenario, Peanuts creator Charles M. Schulz built his final studio in Santa Rosa, and it’s there where the Charles M. Schulz Museum was established as a permanent home to Snoopy and the gang. So too the sweet voices heard on “Hark the Herald Angels Sing” are from San Rafael’s St. Paul’s Church Children’s Choir.)

For this new edition of the soundtrack for A Charlie Brown Christmas, reissue producer Nick Phillips and remastering impresario Joe Tarantino resurrected the original stereo analog master tapes along with the original stereo mixes. Longtime fans may have purchased the album before, but the sonic differences between the new edition and the album’s debut CD released in 1988 are vastly different, since analog-to-digital conversion has improved over the past quarter century as a side-by-side listening comparison will reveal.

The album’s centerpiece track, today as it was in 1965, is “Christmas Time Is Here,” particularly the long, soulful instrumental version that clocks in at just over six minutes.

As the humble Guaraldi told critic Ralph J. Gleason in 1958, “I don’t think I’m a great piano player, but I would like to be able to have people like me, to play pretty tunes and reach the audience.” That wish was granted in a way that far exceeded anything he could have imagined. Derrick Bang summarizes it perfectly: “I’d say Guaraldi got his heart’s desire.”