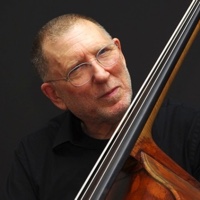 slideshow
Dot Time Records is excited to announce the signing of composer, arranger and bassist Chuck Israels. Best known for his work with the Bill Evans Trio from 1961 through 1966, he is also recognized for his pioneering accomplishments in the Jazz Repertory as Director of the National Jazz Ensemble from 1973 to 1981.

Recently retired from directing the jazz studies program at Western Washington University, Chuck moved to Portland, Oregon to work in its vibrant jazz community and participate in his favorite Northwest city's cultural life.

During his distinguished career Chuck has built a strong discography both as a leader and sideman including; “Coltrane Time", with John Coltrane; “My Point of View", with Herbie Hancock; “Getz au Go-Go", with Stan Getz; and many recordings with the Bill Evans Trio, including “The Town Hall Concert"; “The Second Trio"; “Trio '65; Live at the Trident"; “Time Remembered"; and “Live at Shelley's Manne Hole."

The Chuck Israels Orchestra was founded in 2011 to showcase some of the best jazz instrumentalists and vocalists in the Northwest playing finely crafted and demanding arrangements of the most exciting and durable music we know. The band has played at such international events as the Detroit Jazz Festival. Their debut CD, Second Wind, received a 4 ½ star review from DownBeat.

“Israels' charts are the heart of his band's unique personality. Israels has fashioned an orchestra that flows in beautiful channels, and beauty is something jazz can use these days. This is a band to check out. The originals are original, the standards are freshly reworked and they are played with passion and understanding. The pulse, never bombastic, moves the listener as surely as it moves the band. Israels deserves a lot of credit, but more importantly, the opportunity to be widely heard." —Ira Gitler, DownBeat