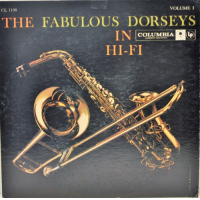 slideshow
When trombonist and bandleader Tommy Dorsey died in November 1956 at his 23-room mansion in Greenwich, Ct., his financial affairs were a mess. Married to his third wife, Janie New, Dorsey passed away several days shy of a court appearance to reply to New's divorce suit. According to the autopsy, Dorsey, 51, had thrown up while he slept, and food lodged in his windpipe and lungs.

For whatever reason, Dorsey did not have a will, and he reportedly left only about $15,000. Dorsey was a big spender. Since New needed money to support their two small children after Tommy's death, she sold their heavily mortgaged Greenwich home for $90,000 (it was worth $130,000 at the time, or $1.2 million in today's dollars). She also sold off Dorsey's publishing companies and then turned to a series of tapes Dorsey had made with his brother Jimmy and their joint band in 1954 and 1955. The Dorseys had financed the recording sessions themselves, and New sold the master tapes to Columbia.

The recordings were released by Columbia in 1958 as The Fabulous Dorseys in Hi-Fi, released as two single-LP volumes. As Peter J. Levinson noted in his book, Tommy Dorsey: Livin' in a Great Big Way: “Fortunately for her, the album sold well; it would reach a peak of #8 on the Billboard pop chart in 1958."

Arrangements were by Ernie Wilkins, Howard Gibeling, Deane Kincaide, Sy Oliver, Dick Jones and Neal Hefti. I've owned the albums since the early 1970s, and they remain among the Dorseys finest joint recordings. The sound is spectacular and the feel is Dorsey, but warmly modern, in an elegant brassy way.

Here is a soundless color home movie of the Tommy Dorsey Orchestra on the road in 1954 shot by Buzzy Brauner, a tenor saxophonist who played with both Jimmy and Tommy Dorsey. A special thanks to his son, Steve, who sent along the link to the home movie. My suggestion is to click on the songs below and watch the home movie while the music plays...

Here's I Should Care, arranged by Dick Jones...

Here's It Started All Over Again, arranged by Dick Jones...

Here's my favorite version of Moonlight in Vermont, with Tommy and Jimmy Dorsey, arranged by Neal Hefti...