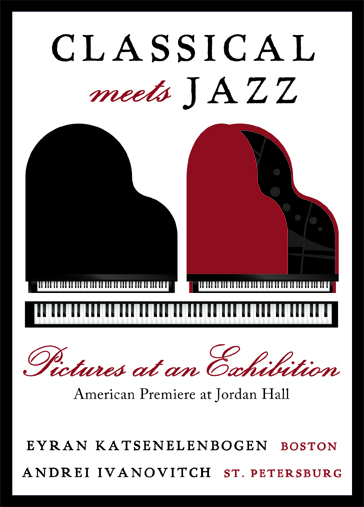 Eyran and Andrei's two-piano onstage dialogue weaves together classical and jazz styles in a revolutionary interpretation of Mussorgsky's timeless masterpiece. Pictures at an Exhibition is performed as one organic and unified piece, with all thirteen movements presented in their original order. Each movement is approached differently as the two distinguished international pianists explore how composition and improvisation come together in a creative and unique way.

“Eyran Katsenelenbogen answers each picture with a jazz improvisation to the classic setting of Andrei Ivanovitch: Breathtaking, brilliant and exciting... an absolute sensation that will go down in the history of special concert events."— Bettina Stenftenagel Allgemeine Zeitung (Germany)

About the History of Classical Meets Jazz: Pictures at an Exhibition

Classical Meets Jazz: Pictures at an Exhibition was conceived by philanthropist and concert producer Gerhard Hummer of Sossmar, Germany. Mr. Hummer met Andrei Ivanovitch during Andrei's tour in Germany in 2004. The following year he met Eyran Katsenelenbogen in Rome at Eyran's concert at the Teatro di Marcello. Gerhard first invited both pianists separately to perform at his Culture Salon in Soosmar, and in 2007, he organized a tour for both pianists in Germany. The world premiere of Classical Meets Jazz: Pictures at an Exhibition took place during this tour, at the C. Bechstein Centrum in Hamburg, Germany, on October 10, 2007. It was followed by additional concerts in Peine, Seesen and Barsinghusen. The following year the program was played at the Auditorium Maximum at Hildesheim. Also in 2008, Eyran was invited by the St. Petersburg Concert agency to perform the program with Andrei in St. Petersburg, as part of the Piano Express Festival. The Russian premiere took place on November 28, 2008 at Mirrors Hall in St. Petersburg. The New England Conservatory of Music in Boston, Massachusetts, hosted in its prestigious Jordan Hall the American premiere of Classical Meets Jazz: Pictures at an Exhibition on May 24, 2009. 873 people attended the American premiere.

Eyran and Andrei continue their international solo touring in 2011, as well as their collaborative touring with Classical Meets jazz: Pictures at an Exhibition. On September 4, 2011, they will perform the program in a special concert at the Burg Namedy Castle in Andernach, Germany.

A Personal Note from the Artists:

“In creating the program for Classical Meets Jazz: Pictures at an Exhibition, we honor Gerhard Hummer's belief that music can unify people from different cultures. Throughout the continued process of performing Classical Meets Jazz: Pictures at an Exhibition, our friendship has grown. We owe this friendship to Gerhard, whose friendship we cherish. We find that this program has also deeply affected our individual musical styles. While Andrei is excited about improvising, Eyran has developed a love for Russian classical music."

Requests for a press packet including Classical Meets Jazz: Pictures at an Exhibition DVD review / airplay copy may be directed to Eyran Records Management :


Promenade
Gnome
The Old Castle
The Tuileries Garden
Bydlo
Ballet of the Unhatched Chicks
Two Jews: Rich and Poor
Promenade
Limoges: The Marketplace
Catacombae
With the Dead in a Dead Language
The Hut on Fowl's Legs (Baby Yaga)
The Great Gate of Kiev

Andrei Ivanovitch, the great-grandson of the legendary Romanian composer Ion Ivanovitchi who wrote more than 100 waltzes, including The Waves of the Danube, was born in Bucharest in 1968. He studied music at the Saint Petersburg Conservatory, at the Russian Music Academy in Moscow, and eventually, at the Higher School of Music in Karlsruhe, Germany. Currently, Andrei is a senior faculty member in the Department of Advanced Piano at the Rimsky-Korsakov Conservatory in Saint Petersburg, Russia.

Between 1992 and 1994 Andrei won top awards at six international music competitions, including the Grand Prix and Gold Medal at the prestigious 1994 International Competition of Pianists in Cincinnati, Ohio. Following his debut at the Lincoln Center in 1996, the New York Concert Review critic wrote: “It was a performance that reminded me in many ways of the young Ashkenazi and, indeed, even the nonpareil Dinu Lipatti. No greater compliment can be paid..."

In 2001, Andrei was featured in a Canadian film about Glenn Gould's trip to Russia in 1957. In this film Andrei played his interpretations of Bach's music as Gould's Russian follower. The film was released in Europe and North America in conjunction with Gould's 70th anniversary.

Andrei was invited to perform as a featured soloist with such well-known orchestras as the Russian National St. Petersburg Philharmonic, the Tbilisi Symphony and the Baden-Baden Philharmonic. He has also played with well-known European chamber ensembles such as the Taneev Quartet. In addition, he frequently judges international competitions.

Andrei regularly performs internationally, including recent performances in China and Japan. His many recordings have received high acclaims from major international music publications.