Shirley Crabbe was destined to become a jazz vocalist. She swings so easy and her clarity, pitch and tone draw me into her music like a whirlpool.. —Musical Memoirs 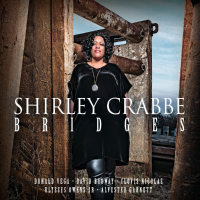 slideshow
Some vocalists excel at lyric interpretation. They know how to tell the story of a song with subtlety and nuance. Other singers have such beautiful voices that they’d be a pleasure to listen to if they sang the periodic table set to a Brahms lullaby. It’s not easy to say which is Shirley Crabbe's strength, since she possesses both those talents in equal measure. Now, Bridges, her newest CD and follow-up to her 2011 debut release Home, re-affirms Crabbe’s position as a rising star in the jazz firmament.

Crabbe’s singing career might have turned out very differently if it weren’t for advances in medical laser technology. A native of an artsy community in Rockland Country, just outside of New York City, Crabbe has been singing since she was a child. Although she was first attracted to opera, she also became interested in jazz as a senior in high school when she was chosen as the featured female vocalist for the All Eastern Jazz Band at a major regional event. She went on to study music at Northwestern University and then earned a graduate degree from the Manhattan School of Music with the idea of pursuing a career in opera.

Shortly after grad school, she developed a serious medical problem with her vocal cords that almost ended her singing career before it had really begun. Luckily, modern medicine gave Crabbe another chance when a new surgical procedure restored her vocal cords to full health.

Although she still loved opera, she also loved the creative freedom afforded by jazz. After a lengthy hiatus, Crabbe returned to performing with a new vision for the future and soon established herself on the New York jazz scene, performing in clubs like Minton’s, Lenox Lounge, The Metropolitan Room, and Birdland.

The overarching concept of Bridges is about connections. There are bridges that we cross, bridges that we burn, and bridges that we build, and each song that Crabbe chose exemplifies those interactions. It is an eclectic project, featuring jazz standards, a pop tune, a couple of originals, and a hip, updated version of “Blessed Assurance,” which is a well-known Christian hymn written in 1873 that Crabbe included because it’s one of her mother’s favorite songs.

Crabbe opens the CD with “Isn’t It a Lovely Day,” a love song she borrowed from Ella Fitzgerald, who was an important influence on Crabbe. David Budway accompanies Crabbe on that tune and on Billy Joel’s “And So It Goes” and on “Thief in the Night,” the Dietz and Schwartz song for which Budway also wrote a lush string arrangement. Budway is a versatile pianist who has recorded and performed with a Who's Who of top jazz musicians, including Branford Marsalis, Michael Brecker, Stanley Turrentine, Hubert Laws, and many more. He also accompanies Crabbe on her one- woman show that celebrates the life and music of Ethel Waters.

Crabbe has a deep affinity and admiration for Waters, who managed to overcome grinding poverty and overt racism to become one of the most successful, highest paid stars of her era. Crabbe sings “Taking a Chance on Love,” a tune that Waters originally made famous. She’s accompanied on that tune, as well as on all the other tunes, by Donald Vega, who is also the musical director for this CD. Vega, a Juilliard graduate who studied with Kenny Barron, has won many awards, including the Los Angeles Jazz Society’s New Talent Award, Downbeat’s 2007 Student Music Award for Best Soloist, and the Great American Jazz Piano Competition. Vega is a virtuoso pianist who is currently performing internationally in Ron Carter’s Golden Striker Trio.

“Bridges,” the title tune, is by Milton Nascimento. It’s about finding the bridge that leads to love. On the other hand, “The Bridge,” written by Crabbe and Vega, is about making a connection with your love, but something goes awry in the relationship. Crabbe and Vega also wrote “Promise Me,” which is both a love song and a spiritual song about hope.

“I Didn’t Know What Time It Was,” which Crabbe and Vega arranged with a cha cha feel, is one of Crabbe’s favorite songs that she often sings in live performances. Crabbe just started singing “The Windmills of Your Mind” in live performance only recently and chose to record it because it fit so well with her thematic concept.

Also joining Crabbe on this project are some of the top musicians in the New York City area, including Clovis Nicolas on bass, Ulysses Owens, Jr. on drums, Alvester Garnett also on drums, and Brandon Lee on trumpet, with a string section comprising Chris Cardona on violin, Sean Carney on violin, Todd Low on viola, and Stephanie Cummins on cello.

Bridges is not just a project of love songs; it’s also a project that is genuinely imbued with love. With her superb phrasing, inflection, and honeyed voice, Crabbe’s warmth and sincerity shine through. BRIDGES is an excellent showcase for an artist poised for wider recognition.

Shirley Crabbe has been the opening act for Abbey Lincoln and has recorded with jazz greats Houston Person and Donald Vega, among others. Her debut CD, Home, remained on the JazzWeek radio chart for 26 weeks. She was one of the top 5 finalists at Jazzmobile’s “Best of the Best” Jazz Vocalist Competition held in New York City, and she was awarded Rockland County’s prestigious County Executive Performing Arts Award. Crabbe is also the recipient of the Stanton Bronze Medalist of the 2008 American Traditions Vocal Competition at the Savannah International Music Festival in Georgia. She is the featured soloist on the jazz CD Africa by The Mystic Pilgrims.

Bridges will be available in stores and online everywhere on April 30, 2018.