A master interpreter able to adapt his phrasing to the emotional needs and tempo of the song. Moonlight works on many levels… an exquisite independent jazz gem. —Jonathan Widran, JW Vibe 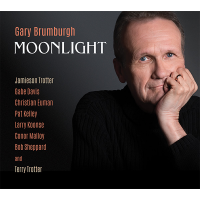 For vocalist Gary Brumburgh, the lyrics of a song are like dialogue from a play, and when he sings, he approaches the material much like an actor prepares for a role. The lyrics, along with the music, suggest to him a scene and a persona with distinct emotions and motivation. This technique allows him to pour himself into a song, creating a highly personalized interpretation of the lyrics. Thinking like an actor comes naturally to Brumburgh, who has a long stage and screen acting resume that dates back to the 1970s.

Now, on Moonlight, Brumburgh’s second CD, his distinctive style takes center stage in an eclectic program of modern jazz tunes, songs from the Great American Songbook, and re-invented pop numbers from the '60s and '70s.

Hailing from a suburb of Buffalo, NY, Brumburgh began acting when he was just 14 years old, performing in school musicals and becoming a soloist in his high school’s advanced chorus program. He received a Bachelor of Fine Arts Degree from the Florida State School of Drama while touring several southern states as the lead singer of a jazz/rock fusion band. He decamped to Los Angeles in 1978 to continue his performance career, where he worked extensively in theater and had camera time in several movies and television shows. He also found work in Las Vegas, backing up Steve Lawrence and Eydie Gormé in an MGM extravaganza.

In 2003, he decided to focus solely on music and began performing regularly in jazz clubs around Los Angeles. He produced his first CD, Up Jumped Spring, in 2008 with some of the top, L.A.-based jazz veterans. Unfortunately, cancer sidelined his performing career for several years as he struggled to get the disease under control.

Brumburgh was diagnosed with neck and tonsil cancer in 2012, which metastasized into his lymph nodes in 2014. After many grueling radiation and chemo sessions, his disease finally went into remission in 2016. Although the treatments caused permanent damage to that area of his neck, his vocal cords and throat were miraculously unaffected, and he was able to return to performing.

Barbara Brighton, the music producer who has worked with Mark Winkler, Judy Wexler, and Julie Kelly, heard Brumburgh when he sat in as a guest performer at a show at Vitello’s, a very popular jazz room in Studio City. Brighton was impressed with his performance and offered to work with him if he ever decided to make another CD. It was an offer that Brumburgh could not pass up.

One of the first things Brighton did was to bring on board Jamieson Trotter, who has made a name for himself as a top-notch pianist, composer, and arranger. Trotter wrote the arrangements on the CD and plays piano on eight of the 11 tunes. Jazz icon Terry Trotter, who has recorded with the likes of Frank Sinatra, Ella Fitzgerald, Natalie Cole, and Celine Dion, among many others, plays on the other three tunes. Terry Trotter is an old friend of Brighton’s and just happens to be Jamieson’s father. This is the first time the two of them have appeared together on the same project.

Los Angeles is home to many of the finest jazz musicians in the country, and Brighton also enlisted some outstanding veteran and younger musicians, including Bob Sheppard on tenor sax & flute, Pat Kelley and Larry Koonse on guitar, Gabe Davis on bass, and Christian Euman and Conor Malloy on drums.

Brumburgh opens the CD with one of his favorite tunes from the 1960s, “Day Tripper.” Brumburgh and the band turn the song, which is one of the Beatles’ earliest forays into psychedelia and the drug culture, into a hip, swinging, contemporary jazz tune. Brumburgh also performs a heartfelt version of “Wichita Lineman,” which was written by Jimmy Webb and made famous by Glen Campbell in 1968. Jamieson’s arrangement of “My World Is Empty Without You” changes the mood of the original 1966 Supremes song from a bouncy, upbeat tune to a somber reflection on loss and loneliness. Brumburgh’s rendition of “Just A Little Lovin’,” originally written as a waltz, here is arranged as a bossa and captures the sexy feel of Dusty Springfield’s 1968 hit. Gail Pettis, the Grammy-nominated singer based in Seattle, joins Brumburgh on Kenny Rankin’s “Haven’t We Met,” which was first recorded by Carmen McRae in 1965. Jamieson Trotter’s arrangements infuse each of these 50-year old tunes with a contemporary sensibility that makes them sound like they could have been written just yesterday. Brumburgh’s mellow, velvety tone makes a perfect pairing for these romantic odes.

Terry Trotter is known as a sensitive, intuitive musician. He knows how to leave space for a song to express its emotional core. His delicate playing is featured on “Wichita Lineman,” “Moonlight,” the title song composed by John Williams with lyrics by Alan & Marilyn Bergman from the movie “Sabrina,” and “What’ll I Do,” by Irving Berlin.

“I’ll Close My Eyes” was written in 1945 by Billy Reid, who composed the music and wrote the original lyrics. The American songwriter Buddy Kaye changed the lyrics to make them more upbeat, and it has since become standard jazz fare. The song has personal resonance for Brumburgh, who used it in his commitment ceremony with his partner. Brumburgh has also been a longtime fan of Michael Franks, and wanted to include “Eggplant,” one of Brumburgh’s favorites, to add a lighter note to the selections.

Gary Brumburgh is an appealing performer whose warm voice and sensitive approach to lyrics make Moonlight an engaging project and a superb introduction to a performer who is well-known to jazz aficionados in LA and is now poised to receive much wider recognition.

Moonlight will be available in stores and online everywhere on June 1, 2018.