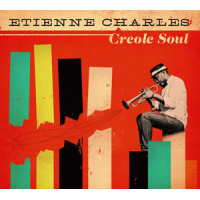 “Mr. Charles knows how to make an album more than just a calling card for a small band, and how to sequence it too; he’s an auteur.” —The New York Times

Etienne will celebrate his newest release with a world tour, beginning on April 27 at Jazz on the Beach in Tobago with stops at the St. Lucia Jazz & Arts Festival, Jazz at Lincoln Center in Doha, Qatar, Le Poisson Rouge in New York and more. Please see below for a complete list of dates.

Charles has been hailed as “a daring improviser” by Jazz Times while Ben Ratliff of The New York Times called him “one of the more ambitious soloists and composers.” A musician and professor at Michigan State University, Charles studied under piano virtuoso Marcus Roberts at Florida State University and Mark Gould, former principal trumpeter of the Metropolitan Opera, at Juilliard. He was also mentored by Jamaican reggae and jazz luminary Monty Alexander and the late multiple Grammy Award-winning Trinidadian-American percussionist/songwriter Ralph MacDonald.

This story appears courtesy of Sacks and Co..
Copyright © 2020. All rights reserved.

For interview requests or more information contact Sacks and Co..