Esperanza Spalding to perform at the GRAMMY Awards 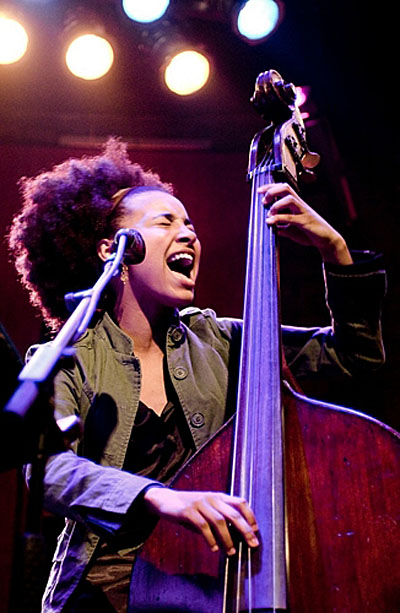 slideshow
Best New Artist GRAMMY nominee Esperanza Spalding will perform on the 53rd Annual GRAMMY Awards. The show will take place at the Staples Center in Los Angeles, California from 5:00 p.m. to 8:30 p.m. on Sunday, February 13, 2011. The GRAMMY Awards will be broadcast live on the CBS Television Network from 8-11:30 p.m. ET/PT.

Spalding is the first jazz artist to receive a GRAMMY Nomination for Best New Artist in 35 years. She was nominated along with Justin Bieber, Drake, Florence & the Machine, and Mumford and Sons. Her inclusion in this mainstream category signifies her considerable appeal to a broad audience.

“I love listening to Esperanza, she is wonderful." —President Barack Obama

“Her soulful songs and masterful bass playing have made Esperanza Spalding a rising star." —People

“her talent is undeniable." —Rolling Stone

“Since the 2008 release of Esperanza, Ms. Spalding has been the recipient of a truly unusual amount of goodwill. A smart, surefooted bassist and a frolicsome, irrepressible singer, she does her part to justify the acclaim. —The New York Times

“Spalding's latest idea is the ambitious new album Chamber Music Society...Described by Spalding as reference to the definition of chamber music as 'music among friends,' the album lives up to its title with the backing of a string trio and elliptical, classical-informed structures, but pushes the concept into eclectic new corners." —Los Angeles Times