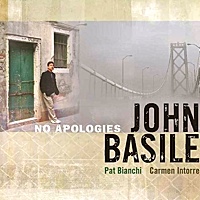 slideshow
All About Jazz members are invited to enter the StringTime Jazz “John Basile No Apologies“ giveaway contest starting today. We'll select FIVE winners at the conclusion of the contest on May 20th.

(Following John Basile at AAJ automatically enters you in the contest.)

About John Basile and No Apologies

John Basile was born in the Boston area and began playing in local show bands and organ groups at an early age. He attended Berklee College of Music and graduated from the New England Conservatory of Music.

Since moving to NYC, John has performed and recorded in a wide variety of formats both as a leader and a sideman. As an accompanist he has worked with Peggy Lee, Sylvia Syms, Rosemary Clooney, Mark Murphy, and Tony Bennett as well as live performances with contemporary instrumentalists George Mraz , Tom Harrell, John Abercrombie and Red Mitchell, to name just a few.

Musically, John's guitar style utilizes a finger-style technique that approaches the guitar like a piano. For John the challenge of comping chord fragments and playing melodies simultaneously provides a backdrop for a more open style of playing and improvising. When asked about his most important influences, the first two names he mentions are not other guitar players; Frank Sinatra heads the list and then Bill Evans. Perhaps this explains why John Basile is one of a select group of jazz instrumentalists who doesn't sound like everyone else. Basile is also one of those rare players who still treasures songs. Not just the tunes, but the songs; musical and lyrical ideas combined in a way that creates a vibrant structure that invites interpretation.

His latest release No Apologies returns to his roots and presents a soulful organ based collection of standards, originals, latin, and 70's pop tunes. “For this project we wanted to approach the music, choice of musicians , and conception totally from an organic (figuratively and literally) approach and work with material that I felt was complete in representing my personal experience in all styles of music over the years."

No Apologies features the Pat Bianchi on the organ and Carmen Intorre on drums, two of the most exciting voices in jazz today. “With a few 70's pop tunes, straight ahead standards, a movie theme, a few originals, and some samba/latin grooves, we had a ball in creating a very complete musical menu that entertains from start to finish."