SOURCE: ALL ABOUT JAZZ PUBLICITY
July 27, 2009
Sign in to view read count 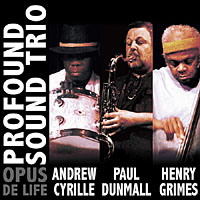 (Following Andrew Cyrille at AAJ automatically enters you in the contest.)

About the Profound Sound Trio

The Profound Sound Trio, first heard in the Vision Festival of 2008, is made up of co-leaders Andrew Cyrille (Drums), Paul Dunmall (Tenor Saxophone/Bagpipes)and Henry Grimes (Acoustic Bass/Violin). Pioneering improvisers Henry Grimes and Andrew Cyrille have performed together worldwide and are inspirations to musicians everywhere, as they continue to carry the torch for innovation and free expression. In 2006, Henry Grimes first collaborated with British mulri-reedist Paul Dunmall, a kindred spirit. Thus the idea for the Profound Sound Trio came about: Three equal partners in total improvisation, informed by history and mystery, truly a meeting of hearts, minds and souls.

As a young musician, Paul Dunmall worked with Alice Coltrane and toured extensively with Johnny 'Guitar' Watson in the U.S. In 1987, Paul Dunmall joined the London Composer's Orchestra led by Barry Guy, and the following year, the collective quartet Mujician was formed with Keith Tippett, Tony Levin, Paul Dunmall and Pail Rogers. Mr. Dunmall can be heard on more than 130 recordings.