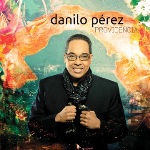 slideshow
All About Jazz members are invited to enter the Mack Avenue “Danilo Perez—Providencia“ giveaway contest starting today. We'll select FIVE winners at the conclusion of the contest on November 4th.

(Following Danilo Perez at AAJ automatically enters you in the contest.)

About Danilo Perez and Providencia

“The future will be a reflection of what we say, think and do today. Let's use wisdom and our art of Providence as a flashlight to guide us to the restoration of humanity."&#151Danilo Perez

Fatherhood changes everyone; for pianist/composer Danilo Perez, the birth of his two young daughters threw down a gauntlet of sorts, a challenge to provide a better world for the girls to grow up in. “What are you doing so we can have a healthy life in the future?" he imagined them asking. “What are you adults leaving us?"

On a practical level, Perez has been working busily to answer that question both in his native Panama and his adopted home of Boston. His annual Panama Jazz Festival has brought world-renowned musicians to the country for the last seven years, not only to perform but also to work closely with local youth. That mission is carried on yearlong by the Fundacin Danilo Perez, which offers musical and cultural education to disadvantaged young people in Panama City. In Boston, he now heads the Berklee Global Jazz Institute, which offers music students an opportunity to explore creativity, advance the social power of music, and connect music with the restoration of ecology and humanity.

Providencia, his latest CD and debut on Mack Avenue Records, is an attempt to provide a complementary musical answer to the same question. “This record is based on the idea that whatever we do has an impact in the universe," Perez says. “The word 'providence,' for me, means standing up for the future of the next generation of children."

That may sound like a tall order for any art form to fulfill, but Perez has an expansive view of music's power and reach, expressed not only in his goals for the album but in its diverse palette and broad scope. Providencia crosses streams of jazz, classical and Latin American folk music-which Perez refers to as “hearing music in three dimensions."

The narrative sweep of the album's opening track, 'Daniela's Chronicles,' is certainly vast enough to suggest a 3D spectacle. Beginning like a Bach invention, the piece progresses through a series of five evocative movements, each written in honor of one year in his eldest daughter's life. “I made a commitment to write a piece every year," Perez explains. “Hopefully it will be a symphony when she's 17. It's been a challenge to keep a thread going because her personality goes through a lot of changes on an annual basis."