SOURCE: ALL ABOUT JAZZ PUBLICITY
March 14, 2009
Sign in to view read count 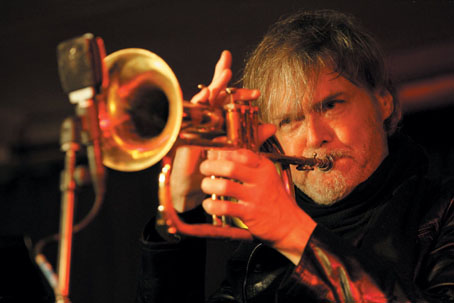 slideshow
All About Jazz members are invited to enter the HighNote Records “Tom Harrell - Prana Dance“ giveaway contest starting today. We'll select FIVE winners at the conclusion of the contest on April 12th.

(Following Tom Harrell at AAJ automatically enters you in the contest.)

A veteran jazz trumpeter, composer, arranger and bandleader, whose work Newsweek described as “pure melodic genius," Harrell steadily garnered international acclaim over the forty-plus years of his career. Earlier this year, he was also honored to receive his second SESAC Jazz Award for his 2007 release Light On (HighNote HCD 7171), which reached #1 on jazz radio charts last fall.

A frequent favorite in Down Beat and Jazz Times magazines' Critics and Readers polls, Harrell is known for his mellifluous sound and is widely regarded as one of the most stylistically versatile and creative improvisers and composers working today. Each album he has released as a bandleader has found its way onto various critics' “Top Ten" lists worldwide. Harrell's Afro-Latin outing, The Art of Rhythm was named “Best Jazz Album of the Year" by Entertainment Weekly in 1998 while his big band album, Times Mirror, garnered a Grammy nomination in 2000. His quintet recording, Live at the Village Vanguard received numerous awards in Europe, and was followed by Wise Children, an album honored with the SESAC Jazz Award in the fall of 2004. In 2003, he was the subject of a featured profile in CBS' 60 Minutes.

His 2007 CD, Light On, is a celebration of Harrell's music with the current members of his quintet, which includes Wayne Escoffery (sax), Ugonna Okegwo (bass), Danny Grissett (piano) and Johnathan Blake (drums). A follow-up album for the Highnote label with the same lineup, Prana Dance (HighNote HCD 7192), was released in January of 2009.

In contrast to his signature recordings during the RCA/BMG years (1996 - 2003) where much of his focus was on projects involving large ensembles, the latest albums on Highnote demonstrate Harrell's skills as a leader of a tight, smaller unit that calls to mind the bands of Art Blakey and Horace Silver. The sheer joy of playing Harrell's music with one another is evident from each member of the quintet. The writing on these recordings is no less of an achievement than his work for the orchestra or the big band. The trumpeter-composer deftly weaves complex harmonies together with infectious grooves and unforgettable melodies while utilizing the available colors to full effect. Harrell's music is at once intelligent, fresh and accessible.

In addition to the 23 albums and hundreds of concerts worldwide as a leader, Harrell has worked with important figures in jazz history including Stan Kenton, Woody Herman, Dizzy Gillespie, Horace Silver, Bill Evans, Gerry Mulligan, Art Farmer, Phil Woods, Lee Konitz, Sam Jones (with whom he briefly co-led a big band in the 70s), Jim Hall, Charlie Haden and with like-minded contemporaries such as Joe Lovano and Charles McPherson.

Some of Harrell's notable RCA/BMG recordings include Wise Children, a project in which he combines woodwinds, brass, horns, strings, guitars, percussion and the vocals of Cassandra Wilson, Dianne Reeves, Jane Monheit and Claudia Acuna with his quintet; Paradise and The Art of Rhythm, both of which feature chamber groups with strings; and his big band project, Time's Mirror.

In 2006, Harrell was awarded a Chamber Music America grant with which he composed and performed new pieces for trumpet and piano. He also recently completed writing symphony orchestra arrangements for the French Orchestre National de Lorraine and the vocalist Elisabeth Kontomanou for a live recording that took place on January 19, 2008.

“Harrell's Prana Dance, recorded last May, is with the same quartet that made Light On two years earlier. Again, the compositions are all Harrell's. This is one instance in which you won't find me complaining that there are no standard songs. Like Shorter, Herbie Hancock and Horace Silver, Harrell delivers an album full of original works that have substance and will endure. To single out three, “Prana," “Maharaja" and “Ride" have the structural simplicity and harmonic magnetism to stay in the mind after only a hearing or two. Those are characteristics of many of Harrell's compositions." -- Doug Ramsey