SOURCE: ALL ABOUT JAZZ PUBLICITY
January 15, 2010
Sign in to view read count 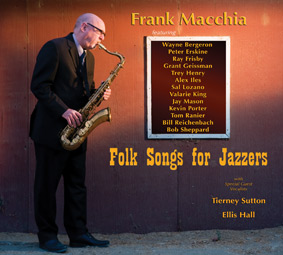 slideshow
All About Jazz members are invited to enter the “Frank Macchia - Folk Songs for Jazzers“ giveaway contest starting today. We'll select FIVE winners at the conclusion of the contest on February 17th.

(Following Frank Macchia at AAJ automatically enters you in the contest.)

About Frank Macchia and Folk Songs for Jazzers

Macchia has worked with Van Dyke Parks, Ella Fitzgerald, Brian Wilson, Clare Fischer, Yes, the Tonight Show Band and composed and orchestrated on numerous films and television shows. He received Grammy nominations in 2007 and 2008 for his arrangements from his CDs Emotions and Landscapes.