SOURCE: ALL ABOUT JAZZ PUBLICITY
June 10, 2010
Sign in to view read count 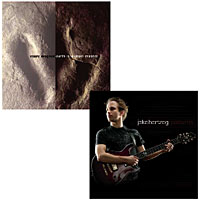 slideshow
All About Jazz members are invited to enter the Buckyball Records 2-CD giveaway contest starting today. Five winners will each win the two CD's listed below at the conclusion of the contest on July 7th.

(Following Marc Wagnon at AAJ automatically enters you in the contest.)

Marc Wagnon was born in Switzerland where he started studying music at an early age on the piano; he got his first taste of being a percussionist by playing the drum in marching bands. At the age of fifteen he got his first drum set and formed his own band for which he composed music and lyrics much influenced by the British progressive rock scene of the 70's (King Krimson, Soft Machine, Led Zepplin) and others.

He went on to study classical percussion at the Geneva Conservatory where he studied for five years; during those years he participated in many local bands, theater and dance projects as a percussionist. He became attracted to the vibraphone as well as increasingly drawn to jazz and jazz-rock, inspired by artists such as Miles Davis, Mahawishnu Orchestra, Return To Forever, and the Art Ensemble of Chicago...

After 5 recordings with Tunnels, Marc returns to his own musical vision, combining great jazz-rock with thought-provoking themes such as recent scientific discoveries, climate change and the human condition. Marc takes on the lion's share of the instrumentation, returning to his first love: the drum set- and is joined by long-time collaborators Van Manakas and Leo Traversa.

Guitar Player Magazine is calling him “...the blazing wunderkind." The Boston Phoenix has declared him “...the WOW! factor." Award-winning jazz guitarist and composer, Jake Hertzog, is making it big in New York City. Jake's second studio album, Patterns, just released this April 2010, is already Guitar Player Magazine's Editor's Pick. Jake is a monthly contributor to GP Magazine's 'Lessons' section under the alias Hey Jazz Guy and has been coined as the Jazz ambassador to the non-jazz world.

JazzTimes calls him “advanced, moving, and elegant." Jake Hertzog's first Buckyball Records release continues to expand on the path he has taken of a rock-sounding guitarist trailblazing in the world of jazz.