SOURCE: ALL ABOUT JAZZ PUBLICITY
April 26, 2010
Sign in to view read count 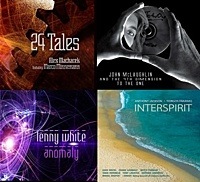 slideshow
All About Jazz members are invited to enter the Abstract Logix autographed 4-CD giveaway contest starting today. Three winners will win all four autographed CD's listed below at the conclusion of the contest on May 26th.

(Following John McLaughlin at AAJ automatically enters you in the contest.)

John McLaughlin - To the One

Mostly written in July and August of 2009, the music composing To the One was set down in the studio in November and December, with very few overdubs, by McLaughlin's current performing outfit, The Fourth Dimension: Gary Husband (keyboards, drums), Etienne M'Bappe (electric bass), and Mark Mondesir (drums). Compositional devices clearly inspired by Coltrane are fused with elements of McLaughlin's own multi-faceted approach, all delivered with a group empathy and shared vision that harkens back to Coltrane's fearless mid-'60s quartet of Elvin Jones, McCoy Tyner, and Jimmy Garrison. The effect of Jones' kaleidoscopic approach to rhythm and drumming is especially felt, brilliantly recast and explored via McLaughlin's gift for complex metrical structures.

McLaughlin's restless, enquiring spirit is captured with disarming immediacy on To the One, vividly enhanced by both the skill and soulfulness of the Fourth Dimension. From the surging opener “Discovery" to the gently propulsive title track which closes the compact, forty-minute program, McLaughlin's own playing is at its very peak: emotional and probing, exploding into flourishes of rapid-fire sixteenth notes one moment, candid and unguardedly vulnerable the next. No slavish imitation or sentimental tribute, To the One is a fiery yet open-hearted work, taking on the artistic and spiritual challenges first offered by Coltrane's jazz masterpiece while making extensive use of the pioneering musical and technical vocabulary that McLaughlin has honed since the beginning of his storied career.

For over 40 years Anthony Jackson has been the bassist's bassist; the man most admired by his peers for his groundbreaking groove work in jazz and pop with the likes of Billy Paul, the O'Jays, Buddy Rich, Roberta Flack, Chaka Khan, Chick Corea, Steely Dan, Donald Fagen, Paul Simon, Al DiMeola, Nancy Wilson, George Benson, Quincy Jones, Steve Khan's Eyewitness, Luther Vandross, Lee Ritenour, Michel Petrucciani, Pat Metheny, Michel Camilo, Mike Stern and Wayne Krantz. Jackson's conception and invention of the 6-string contrabass guitar led to further lauding from his low-end colleagues and resulted in the global standardization of extended-range basses, changing the sound of contemporary music from the bottom up. Additionally, Anthony's landmark use of a pick and phase shifter on the O'Jays' smash, “For the Love of Money," revealed a unique sound and approach that remains one of his signatures. About the only milestone missing from Jackson's remarkable career is a feature album. Being neither a composer, nor known for taking solos, however, Anthony has resisted countless offers (beginning with one from Quincy Jones in 1978). Until now...“

Following his triumphant worldwide reunion tour with Return To Forever in 2008 and separate trio tours in 2009 with Chick Corea and Stanley Clarke and pianist Hiromi with Clarke, drummer Lenny White was primed to put out his own recording, his first as a leader in ten years. With Anomaly, the pioneering jazz-rock drummer returns to his roots, blending powerhouse backbeats and improvisational abandon in a bold, unapologetically aggressive manner that characterized the early 70s fusion movement. On that RTF tour he told sold-out crowds every night: “This is not a boy band, this is a man band. And we need to take back the music as musicians."

“And I really meant that," says White. “We need to restart a revolution so that we can take back the music and stop the fluff. And I'm hoping that this new album is a representation of that...“

Virtuosity is more than mere technical prowess: it also consists of a certain creative restlessness - a constant urge to explore, improve, and reinvent. No matter how well refined the execution, true virtuosity withers when repeatedly making the same statement, running the same patterns, or improvising over the same changes. With his provocative new release 24 Tales, Alex Machacek has sought an inventive new context for both his incredibly fluid, precise guitar work and his expanding compositional vision.

“I have always liked drums," Machacek explains. “On so many fusion and jazz records, there is an extended drum solo--sometimes it feels obligatory. At a certain point I thought, 'How would it sound if I compose something based on a drum solo? Drummers are always getting wilder with what they do in terms of meter and technique..." His fascination with drums led to several experiments with composing music based on (and performed on top of) improvised drum solos - a practice that reaches its fullest potential on 24 Tales...“