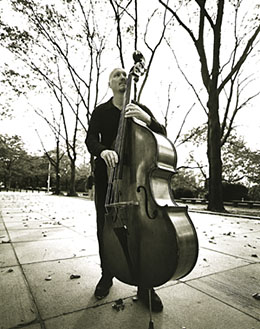 slideshow
Scott Colley's upcoming album Empire is his seventh release as a leader and it seems as though his experience has served him well. “It felt to me that writing the material for this recording flowed quite easily. I think that because I have listened to all these musicians so much over the years, and have been fortunate to play with them all in many different musical environments, it was very easy for me to imagine them all playing together and for me to visualize the different timbres and combinations." With it's impressive line up of long standing musical partners Ralph Alessi, Bill Frisell, Craig Taborn, and Brian Blade, Empire is sure to be another strong addition to Scott Colley's already formidable discography.

“The way that I decided to schedule the recording was different than my previous ones in that we recorded and mixed it in 4 consecutive days, With 2 days of recording and then starting the next morning with editing and mixing. Usually I would take several weeks in between recording and mixing-taking time to decide on tracks and sift through the material. In this case, on the 3rd day at sear sound, Chris and I would edit one song ahead of the mix. In the control room, James Farber would be working on the mix for each song as soon as the edits were brought to him. And I would move back and forth for 2 days editing and mixing. It was intense for me, but I think that it shaped the recording in a great way. Without a lot of time to reflect(or obsess) about which take to use, I made a lot of quick decisions based on the overall feeling of takes. It made the recording, editing and mixing flow as one process.

Walter Sear--the creator of Sear Sound--passed away since we made this recording. I've worked at Sear Sound dozens of times since moving to New York. He created such a great environment for music to happen. I would always look forward to the conversations that I would have with Walter there. Conversations about microphones and recording, movie making, tuba making, the New York music scene in the mid-20th century. I will miss Walter. He was a truly unique and remarkable person."

Some information about Walter's life and work: http://en.wikipedia.org/wiki/Walter_Sear

To keep up to date on the latest Empire news visit Scott's website or his official facebook page. Be on the lookout for upcoming photos and samples from Empire due for U.S. release on August 31st!