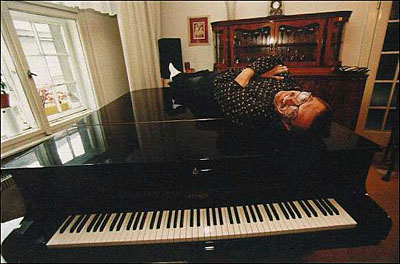 slideshow
It’s not often you see starched white table-linen and little posies of flowers decorated with national flags at a jazz gig. But this was a special event put on by the City of London Festival Festival to mark the handover of the EU presidency from the Czech Republic to Sweden (you didn’t know that important fact? Shame on you). As a come-on for a jazz gig this was certainly novel, but it felt mighty peculiar. Would there be speeches, I wondered? Should I have worn a suit?

Fortunately the dignitaries had dressed down, bless them, and the first of the two Swedish acts soon loosened us all up. They were called MusicMusicMusic, which certainly tops my own poll of naff names. It was somehow typical of Swedish jazz artists, who seem determined to disprove the idea that the Swedes are the sober Germans of Scandinavia. This piano trio had an amiable quirkiness that showed the influence of the much-lamented Esbjorn Svensson Trio. Pianist Fabian Kallerdahl, a tall lean fellow with purple trousers and a pastor’s beard, generated an interesting heat that was often bluesy. But the quirky material (we heard the theme tune from ’Allo, allo’ at one point), the light touch, and the side-slipping harmonic turns kept us a million miles away from a genuine American blues.

It was engaging, but their compatriot Bobo Stenson, one of the most eminent jazz pianists around, put them in the shade - despite the fact that it wasn’t really his night. By the time he came on it was late, the flowers and the audience were wilting, and I suspect the wooden-toned piano frustrated him - if his uncharacteristically heavy touch was anything to go by. But quality will out, whatever the circumstances. The number based on a pair of Swedish folk-songs showed what a genius Stenson has for mining maximum intensity from small materials.

Given the occasion, it was inevitable that the middle act, Czech pianist Emil Viklicky, would respond with some Czech folk-song. But this was no formal bow. Viklicky may look like an elderly professor, but there’s a tremendous passion lurking in that somewhat stooped frame, a passion with a double focus - American blues and jazz, and Moravian folk-song. Their modal melancholy links them, as does their awareness of life’s tragic fatefulness. Even so, it takes musical daring to weld them together, and Viklicky’s spellbinding performance shows he has it in abundance.