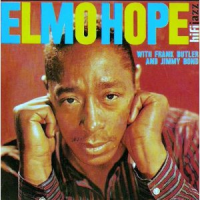 slideshow
In 1957, pianist Elmo Hope moved from New York to Los Angeles. He had little choice. His cabaret license was suspended following a drug conviction, and the only place where he had musician friends and the likelihood of work was on the West Coast. As Leonard Feather remarks in his liner notes for one of Hope's finest recordings, Elmo Hope Trio (Contemporary), “black musicians in the late 1950s and early '60s constituted a jazz underground; they surfaced occasionally on a record date at Contemporary or Pacific Jazz, or at one of the small jazz clubs. But mostly it was a period of scuffling."

Recorded in February 1959, Hope was joined by Jimmy Bond on bass and Frank Butler on drums. Seven of the eight tracks were originals: B's a-Plenty, Barfly, Eejah, Boa, Something for Kenny, Minor Bertha and Tranquility. The sole standard is Like Someone in Love. In the notes, West Coast tenor saxophonist Harold Land reflected on Hope: “Each Elmo Hope composition seems to reveals a new aspect of the man's personality."

Hope clearly was influenced by Bud Powell, but he wasn't a clone. While he exhibits spirited bop lines, there's a complexity to his playing that's all his own. Hope's lines swirl and snap like a mixing-bowl whisk. His improvised lines are more fractured and jagged than Powell's, with a less fierce attack than Thelonious Monk's. Yet he has a Monkian flavor.

Hope spent four years in segregated L.A. and recorded with top black musicians, including Land and Curtis Counce, before returning to record in New York. By then, He was married to Bertha Hope, and the couple had a daughter.

A long-time heroin user, Hope was unable to gain jazz visibility. His health declined and in 1967, he was hospitalized with pneumonia, suffering a fatal heart attack that May. He was 43.