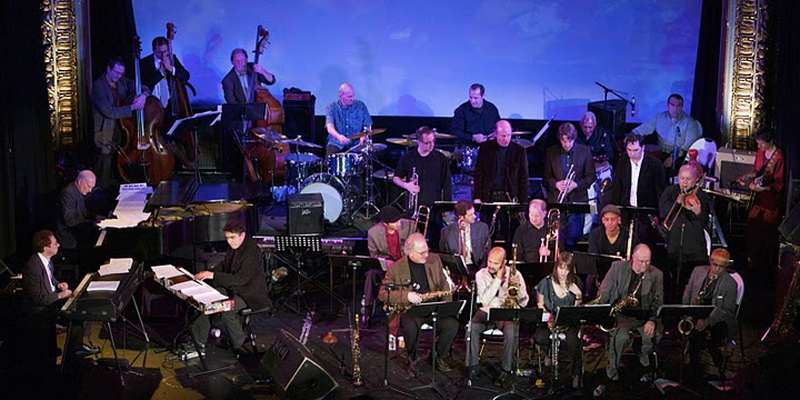 slideshow
Twenty-five years is a long time in jazz. When saxophonist/composer/bandleader Russ Gershon founded the Either/Orchestra back in 1985, trumpeter Miles Davis was on the crest of his jazz/funk comeback wave, and the so-called Young Lions movement fronted by trumpeter Wynton Marsalis was coming into prominence, just as Weather Report—the last of the great '70s fusion bands—was coming to an end. In those days, the orchestras of Cab Calloway, Buddy Rich and Sun Ra were still touring, and you could also see Sarah Vaughan, Stan Getz, Jackie McLean and Stephane Grappelli in concert.

When the Either/Orchestra played its first gig in Cambridge Public Library in December 1985, Gershon set in motion an adventure that, so far, has produced 12 albums with some of the most original and arresting large-ensemble jazz of the modern era. Ian Patterson spoke with Gershon recently, following the release of Either/Orchestra's latest, Mood Music for Time Travelers (Accurate Records, 2010), and, as expected, he's a lot to say about a group that's now one of the longest-standing groups in modern jazz. Check it all out in Ian's in-depth interview, Russ Gershon: Time Traveler, Four Million Years Later, published today at All About Jazz!

All About Jazz is committed to bringing you the most extensive coverage anywhere, surrounding new releases, so be sure to check out all the buzz about Russ Gershon, Either/Orchestra and Mood Music for Time Travelers today at All About Jazz!