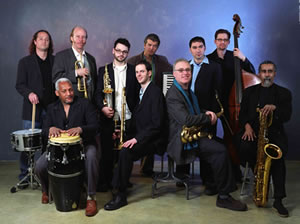 slideshow
The Massachusetts-based Either/Orchestra will be celebrating it 24th birthday with a performance at 8 pm on December 5 at the Center for Arts in Natick (MA). The ten-piece group, of six horns, piano, bass, drums and congas, whose first show was on December 17, 1985 in the Children's Room of the Cambridge MA Public Library, will feature its distinctive mix of original jazz flavored with Latin and Ethiopian grooves.

Only bandleader/saxophonist Russ Gershon and trumpeter Tom Halter remain from the first show back in 1985, although the band is also populated by members of long standing such as Charlie Kohlhase (15+ years), Rick McLaughlin (12 years), Joel Yennior (11+) and Vicente Lebron (11). Their newest member, alto saxophonist Hailey Niswanger, is the first member of the band to be born in the 1990s and the first woman to have full time role.

The last few years have been fruitful for the E/O, as they have played many high-profile concerts (Glastonbury Festival, London Barbican, Moers Music, Banlieues Bleues, Lincoln Center, Harbourfront Toronto) with the greats of Ethiopian music. This series will be continued at Teatro Manzoni, Milan Italy, on January 24, 2010, with Mahmoud Ahmed and Mulatu Astatke. The E/O has also recently premiered a raft of new compositions by leader Gershon, and will be featuring some of the latest on December 5. They have several albums in various states of completion, which will be released in 2010-2011.