SOURCE: TWO FOR THE SHOW MEDIA
February 4, 2009
Sign in to view read count 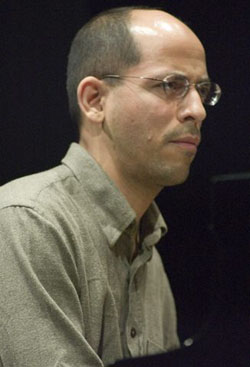 slideshow
Pianist, Composer, & Bandleader Edward Simon will be performing with his Quartet (featuring Ben Street on bass, Adam Cruz on drums & Mark Turner on Saxophone) at The Village Vanguard in NYC from Tuesday, February 24th, 2009 thru Sunday, March 1st, 2009

Edward Simon was born in the coastal town of Punta Cardn, Venezuela where he grew up in a family of musicians surrounded by the sounds and rhythms of Latin and Caribbean music. The talent he showed as a youth led his father to send him to study in the US, where he won scholarships in classical piano at The University of the Arts in Philadelphia under the tutelage of concert pianist Susan Starr and in jazz at the Manhattan School of Music where he studied with Harold Danko. While a student in his teens, Simon performed with Philly guitarist Kevin Eubanks and saxophonist Greg Osby.

Settling in New York City in 1989, he performed with many jazz masters, including Herbie Mann, Paquito D'Rivera, Bobby Hutcherson, Bobby Watson, Terence Blanchard, Jerry Gonzalez and The Fort Apache Band, Arturo Sandoval, Many Oquendo and Libre and Don Byron. Simon quickly discovered that if he wanted to use jazz as a medium of expression he needed to immerse himself in this tradition. Membership in Bobby Watson’s influential group Horizon (1989-94) and the Terence Blanchard Group (1994-2002) were instrumental to this end during his formative years. The experience of playing with Paquito D'Rivera proved to be pivotal, as it sparked an interest in the music of his native country.

Simon made his first recording as a leader in 1994 (Beauty Within, on Audioquest), giving birth to the Edward Simon Trio. That same year he became a Thelonious Monk International Jazz Piano Competition finalist. Since then he has written extensively for the trio, using it as a platform for other projects and developing his unique compositional voice. In 1995 Edward received his first commission and composed Rumba Neurotica for the Relache Ensemble.

In recognition of his distinctive accomplishments, Chamber Music America awarded Edward Simon the New Works: Creation and Presentation grant to compose the Venezuelan Suite. In recognition for his outstanding work in jazz composition. In 2005, he received a Pennsylvania Council on the Arts Fellowship. Simon has served as adjunct faculty at the University of the Arts and continues to teach clinics, seminars and workshops at music schools and universities around the world. Currently, he serves as adjunct faculty at The New School for Jazz & Contemporary Music in New York City. Simon has participated on more than forty recordings, including several Grammy nominated albums, lead by jazz greats such as Terence Blanchard, John Patitucci, Bobby Watson, and Herbie Mann among others and numerous soundtracks. He has produced seven critically acclaimed albums as a leader including two New York Times Top Ten jazz records of the year: Edward Simon (Kokopelli, 1994) and Simplicitas (Criss Cross, 2005). Today, Simon keeps himself busy writing for and leading his trio, Sexteto Venezuela, Afinidad - a quartet co-lead with long time collaborator saxophonist David Binney and Simon, Simon & Simon, a project co-lead with his two brothers. While he may be considered as part of a new generation of “multilingual” musicians, which have grown up studying classical, jazz and Latin American music, Edward is inventing a language that transcends any rigid genre.