A gifted artist currently in his sophisticated prime. —John Fordham 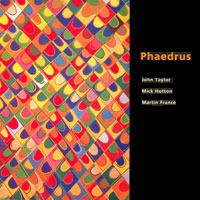 Edition Records will release five sought-after Julian Argüelles back catalogue albums on July 26, 2019, including his very first album as a leader, Phaedrus, celebrating 30 years since it was recorded in 1989.

He's is about to make some of his back catalogue available for streaming over summer 2019 through Edition Records. This will include his very first album as a leader, Phaedrus, celebrating 30 years since it was recorded in 1989. It features John Taylor (piano), Mick Hutton (bass) and Martin France (drums). “Apparently there's some film footage of the Phaedrus recording but I haven't been able to find it yet. If any of your readers can help, that would be amazing. This is a special album for me not least for the fact that it features the much missed John Taylor on piano."

Four out of the five recordings are out of stock and no longer available. Having them accessible online will introduce Julian's current and younger fans to some of his earlier work. He'll be featuring tracks on social media and there will be competitions to win some unique stuff.

See below for Julian's personal track choice from each album and a little background.

Featured Track: Phaedrus. Personnel: Julian Argüelles- tenor/soprano, John Taylor- piano, Mick Hutton- bass, Martin France- drums. “Phaedrus" is the first track, and rarely for me, the title track of the album. The album is my first as a leader and features the much missed John Taylor. “Phaedrus" is a tune I still like to play 30 years on. The title comes from a character in a book called Zen and the art of motorcycle maintenance by Robert M Pirsig.

Featured Track: The 3 Js. Personnel: Julian Argüelles- saxophones, clarinets, recorders, keyboards and handclaps Steve Argüelles- percussion and drums. This tune is written with these great musicians in mind: John Surman, John Taylor and Jon Christensen. The 3 Js! They appear on a great CD together called Journey’s End, by Miroslav Vitous. Its a great recording and I was very much into these three masters. Although this is my first solo album I do feature my brother Steve. I remember around that time we used to do a lot of gigs together as a duo. He's always been so easy to play with.

Featured Track: Brushes. Personnel: Julian Argüelles soprano, tenor, baritone and contrabass saxophones; clarinet and bass clarinet; piccolo, flute and alto flute; mouth harp, saxophone percussion, prepared piano and voice. This is my 2nd solo album after Scapes (which was technically part duo with my brother Steve). On this track, I used lots of overdubs including hitting and tapping the sax in various ways creating varied percussive sounds. An artist put a great video together using images with this track as the background...very arty and I like it! The whole album was recorded during lonely nights when I was in Frankfurt as a member of the HR Radio Big Band.