Eddie Henderson Paints Childhood Memories On His Furthermore Recordings Debut, "For All We Know" 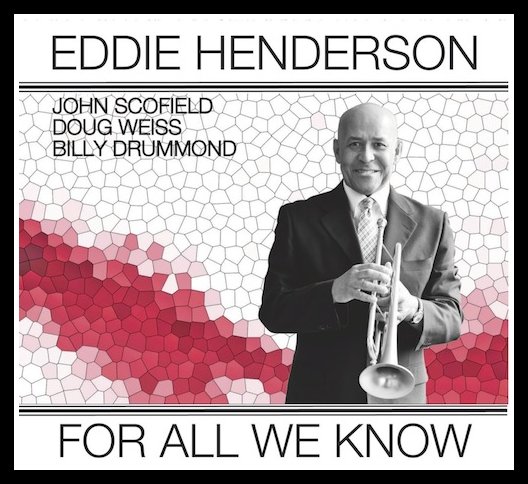 slideshow
Charlie Parker said that “if you don't live it, it won't come out of your horn," and on Eddie Henderson's soulful, sublime and swingin' new CD For All We Know (Furthermore Recordings, October 12) you can hear all of the inventions, dimensions, places and spaces of his artistry, which, like fine wine gets better as time goes by. Joining Henderson on this dynamic pianoless date are guitarist John Scofield, bassist Doug Weiss, and drummer Billy Drummond, moving and grooving on eight tracks of standards and original compositions.

“I didn't use a piano this time, because John Scofield hired me a couple of years ago," Henderson says, “and just the way he comps ... you know he's such a talented accompanist - it felt like a symphony orchestra. So I had no qualms about not using a piano. And then there's Billy Drummond—he teaches at Julliard with me—I've known him for years. And he's on a couple of my CD's. He's a wonderful player. And Doug Weiss, the bassist; I worked with him for many years. He was a staple in the Al Foster Quartet, and I worked with Al for three tours. I knew that the chemistry of John Scofield, Doug Weiss, and Billy Drummond would work. I learned this kind of awareness from Miles Davis: You listen before they even get together—whether one person plays ahead or behind the beat."

The reference to Miles Davis is central to Dr. Henderson music. As this CD aurally illustrates, the leader has adapted the Prince of Darkness' feather-breathed open horn sound and mellow-toned, Harmon muted trumpet and flugelhorn stylings into his own unique musical voice, backed by Scofield's up-south, grand-and-gritty guitar fireworks, Weiss' sure-footed basslines and Drummond's fiery yet finessed drumming.

The first selection, Fat Waller's classic “Jitterbug Waltz," reborn here with an interlocking maze-like arrangement, is a song of special significance for Henderson. “Fats Waller just holds a place with me because on a videotape of Fats there's a pretty lady sitting on the piano singing 'Ain't Misbehavin..'. that was my mother! She was in the original Cotton Club chorus line with her identical twin and they were called the Brown Twins. Lena Horne was my mother's roommate and Bojangles was her dance partner. So 'Jitterbug Waltz' dates back to when I was growing up hearing Fats Waller."

Henderson's other selections including the title track, and the old forties number “By Myself," are also imbued with his smooth, Milesian musings, in contrast to the mid-tempo “Be Cool," written by Henderson's wife, Natsuko, and the hyper-bop number, “Sand Storm."

And then there's Henderson's funky, second line-syncopated take on Herbie Hancock's Blue Note era hit “Cantaloupe Island," with a grooving arrangement derived from an unlikely source. “That arrangement comes from the last time I played with Herbie about five or six years ago and the Gershwin's World tour," Henderson says. “Missing Miles"— Henderson's endearing and heartfelt tribute to his mentor/idol, and “Popo," a bouncy, hip-hop friendly track (the title is his wife's nickname) based on Miles Davis' “U n I" from Davis' 1983 Star People album, round out this excellent recording that charts Henderson's musical evolution in the twenty first century.

For All We Know; the latest chapter of Eddie Henderson's spectacular musical journey, continues to be as rewarding today as it was when trumpeter Louis Armstrong encouraged him to play those many years ago. “I remember asking Miles how you play. And he said learn as many licks as you can, and then scotch-tape them together ... I was more concerned about just learning the licks. Then, after you learn the licks, I started working on getting an identifiable sound. It's difficult, but that's the mark of an artist."

Dr. Eddie Henderson's “bio" tells us that for five decades, the New York-based, Julliard instructor—the critically-acclaimed trumpeter/bandleader/medical practitioner who burst on the scene as a member of Herbie Hancock's pioneering seventies Mwandishi ensemble, and has played with everybody from Pharaoh Sanders, Jackie McLean and McCoy Tyner to Art Blakey, Dexter Gordon and Roy Haynes—has been writing his amazing life story through the science of sound. His mother was a dancer in the famed Harlem Cotton Cub. His first trumpet lesson was from Louis Armstrong, and his childhood friend was Miles Davis!

Miles Davis was a family friend and stayed with the Henderson family in 1957. “Miles was staying at the house," Henderson says, “and that week he was at the Blackhawk (San Francisco), and he took me to the gig that night, and when I heard that, I said 'that's what I want to do [laughs]." His other trumpet influences included Freddie Hubbard, Booker Little, Clifford Brown, and Kenny Dorham. After a three-year stint in the Air Force, Henderson graduated from the U.C.-Berkeley in 1964, majoring in zoology, and earned his medical degree from Howard University four years later. While he did his residency in psychiatry, and only practiced general medicine, Henderson also gigged with John Handy, Joe Henderson (no relation), Big Black, and Philly Joe Jones.

His big break came in 1970, when he joined Herbie Hancock's Mwandishi ensemble: which featured saxophonist/clarinetist Benny Maupin, trombonist Julian Priester, bassist Buster Williams, and drummer Billy Hart. They experimented with jazz-fusion motifs mixed with African rhythms. The band members took on Swahili names; Mwandishi—Hancock's name— means “composer," and Henderson's was “Mganga" which means “doctor of good advice." They recorded three groundbreaking albums: Crossings, Mwandishi and Sextant, before disbanding in 1973. “The most significant thing for me was that it was my first major gig that brought me to the forefront. And that really changed my life," Henderson fondly recalled. “It was for sure that I knew what I wanted to do for the rest of my life."

And it is a life full of vivid and vibrant records over a three-decade period. Of his thirty-plus albums as a leader, who most critically-acclaimed include his first LPs, Inside Out and Realization; the soulfully-charged Blue Note seventies records Sunburst, and Heritage; his Capitol date, Running to Your Love, to his nineties Steeplechase recordings Phantoms, Flight of Mind; his Milestone projects, Think of Me; Dark Shadows, Trumpet Legacy; So What (Columbia, 2003), Precious Moment (Kind of Blue Records, 2006) and Association, (Alessa, 2007).