Some songs and music are timeless. I tried to pick songs for this record that have that quality, and that moved me in some way. The different vamps and solo sections that I added to some of these may not be what you have heard before, but they are what came out naturally, without a lot of plotting and planning &#151Ed Roth 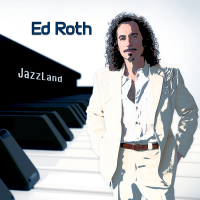 His playing cuts across styles and genres as he masterfully executes jazz, rock, and pop sensibilities with a contemporary flavor. Ed Roth is truly a monster player, and his talent shines brightly on Jazzland, his debut album release for Funzalo Records out on February 22.

On Jazzland you will find Roth’s excellent take on Jazz classics like Charles Mingus’ “Nostalgia in Times Square,” John Coltrane’s “Big Nick,” Chick Corea’s “Crystal Silence,” and Miles Davis’ “Milestones,” Freddie the Freeloader” and “Blue in Green” among others.

A sonic purist, Roth is adept at not only piano but also Fender Rhodes, Hammond B3, Wurlitzer, clavinet and accordion, (as well as a Kawai artist grand piano), all of which he records at his own Glendale, CA, studio, The Keyboard Room.