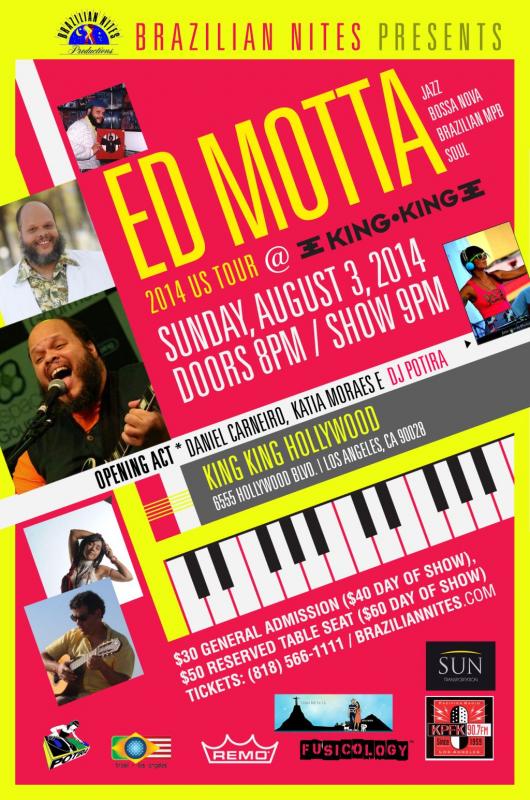 “Ed Motta pushes all the right retro buttons. There are blasts of soul-jazz and blues-rock and a library of funky dance grooves, replayed in the spirit of the originals.” John L. Watters, The Guardian

Los Angeles – Brazilian Nites Productions, presenters of the top Brazilian musical talent since 1989, is proud to present the multifaceted singer, musician and composer Ed Motta on his 2014 US Tour at the King King Hollywood on Sunday, August 3 at 8:00 p.m. Ed Motta is most known for his versatile style that is a unique mix of Brazilian MPB, rock, soul, funk, bossa nova, jazz and reggae music. Opening the concert are the sounds and energy of Katia Moraes and composer and guitarist David Carneiro. DJ Potira adds an additional layer of music to the show with her unique mixing style and merger of a diverse sampling of music genres.

Born in Rio de Janeiro, Brazil, Ed Motta’s musical career spans almost three decades and includes international music tours, a gold record and numerous awards and accolades. Motta plays several instruments and is linked to many forms of music, especially the sophisticated MPB (musica popular braileira), characterized by the typical Brazilian styles of samba, samba-canção and baião, combined with foreign influences, such as jazz and rock. Motta became an instant success at the age of 16, when his 1988 debut album “Conexão Japeri” and the songs Manuel, Vamos dançar, Baixo Rio and Um love, became big hits. He has since released over a dozen albums and film soundtracks, and in 2006 was nominated for a Latin Grammy Awards in the Latin Jazz category. He has also collaborated and performed with Roy Ayers, Chucho Valdés, Jean-Paul “Bluey" Maunick (leader of Incógnito), Ryuichi Sakamoto, Paul Griffin, Bernard Purdie, Bo Diddley, Ed Lincoln, Miltinho, Mondo Grosso, Marcos Valle, João Donato, Dom Salvador and many others. (http://edmotta.uol.com.br/en/)

Katia Moraes, is a Brazilian singer-songwriter who has made Los Angeles her second home. Recognized for having a magnetic stage presence and delivery, she has sung with greats like Oscar Castro Neves, Sergio Mendes and Airto Moreira. She has an eclectic repertoire of varied styles from pop to the traditional samba and jazz and has created and performed with numerous Southern California groups. She will be joined on stage with Hussain Jifry on bass, Mitchell Long on guitar, and Leo Costa on drums. Moraes has also created, produced, and co-directed the shows “Brazilian Heart Celebration,” shows dedicated to three pillars of Brazilian music: Elis Regina, Clara Nunes and Maria Bethânia. (www.katiamoraes.com).

Guitarist, composer and singer, Daniel Carneiro was born in Brazil and started playing guitar at the age of 13. He has been writing music since the age of 16. He is a very versatile musician and is accomplished in a variety of musical styles. Carneiro has composed scores for a number of music and commercials for brands such as Apple, Sony, Hyatt, Levi’s, ExxonMobile and Snickers. He studied at the Los Angeles Music Academy (LAMA) in Pasadena. Here he studied with Frank Gambale, Jeff Richman, Ross Bolton. After finishing his degree in guitar, he began performing his original compositions in the local LA circuit with his 7 piece band New Cycle. He is currently studying Jazz guitar with Sid Jacobs. (danielcarneiro.com)

DJ Potira blends assorted Brazilian beats with urban mixes and creates a well-balanced musical landscape that sets the tone and adapts to the environment and audience. Potira was born in Rio de Janeiro to Bossa Nova singer Mirene Alves. After moving to Los Angeles in 2000, she immersed herself in the local music scene, where she quickly landed a residency at Starshoes in Hollywood. She has since been being booked by major brands such as Teen Vogue, Elle Magazine, Chanel, Global Dining Group and Leblon. She has developed her own eclectic style, seamlessly wedging classic Hip-Hop beats between Samba rhythms and Cuíca Drums to Electro and Indie Rock, sprinkled with the occasional Top 40 hit remixed. (www.djpotira.com)

Brazilian Nites Productions has been successfully organizing events since its inception, bringing people of different ages and nationalities together to experience the allure and character of Brazilian culture. The company produces several shows each year, including two annual events: the Brazilian Summer Festival at the John Anson Ford Amphitheatre and L.A.’s largest Brazilian Carnaval on the West Coast in February.

For more information or to purchase Tickets for all of the Brazilian Nites Summer Series concerts visit: at braziliannites.com or call 818-566-1111.