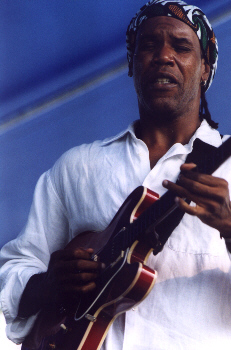 Jazz Guitarist Ed Cherry will lead a jazz seminar as part of Long Island University's Jazz Clinic Series. The series features musicians and music professionals with extraordinary links to jazz history in addition to being outstanding in their own right.

The clinics are free and open to the general public. They take place on various Tuesdays, from 4:00 - 6:00 PM, in room H-106 of the Humanities Building on Long Island University's Brooklyn Campus. The campus is located at the corner of Flatbush Avenue Extension and Dekalb Avenue in Downtown Brooklyn. It is accessible to all major bus and subway routes and Long Island Railroad. For more information call (718) 488-1668

Guitarist Ed Cherry first rose to prominence as a member of the Dizzy Gillespie quartet and big band from 1978 to 1999, with whom he recorded the Grammy Award-winning “Live at Royal Festival Hall" (Enja)

1993, Mr. Cherry began his career as a leader releasing two CDs on the Groovin High label, releasing “First Take" (1993) and “Second Take" (1995). In 2001, Cherry toured Europe for the first time with his own group and released his third CD, “The Spirit Speaks" on the Justin Time label, inspired by the great jazz organist Jimmy Smith with whom he had also recently worked.

Mr. Cherry also has impressive credentials as a music educator. He taught guitar at Essex Community College in Newark, NJ from 1995 to 1996, and at the Henry Street Settlement in New York City from 1996 to 1997. He was also a faculty member at Montclair State University, School of Fine and Performing Arts for J.O.Y. (Jazz Opportunity for Youth).

Today, Ed Cherry remains one of the most active guitarist on the New York jazz scene, playing concerts and festivals all over the world.

The Brooklyn Campus music department offers programs leading to a B.A. in Traditional Music Studies, a B.F.A. degree in Jazz Studies and a B.S. in Music Education in Urban Schools. For further information about the clinics or the music department, call Professor Robert Aquino at (718) 488-1668