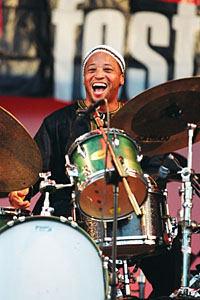 Harper, internationally renowned East Coast band leader, drummer and composer, has often cited Higgins' influence on the evolution of his drumming and instrumental approach. Says Harper, “Billy influenced me profoundly in a number of personal and professional ways. He encouraged me to further explore and incorporate a range of percussive techniques and instruments, especially those with African origins. In fact, my current band includes a percussionist from Senegal who plays the djembe and talking drums and I routinely play the balafon in my shows. He took me under his wing and taught me a lot about life and performing that shaped who I am today as a musician and a person."

Also inspired by the musicianship of greats such as Clifford Brown, Max Roach, Jackie McLean, Cannonball Adderley, Dr. Billy Taylor, and Art Blakey, Harper has led vibrant sextets for nearly two decades. His band, the Winard Harper Sextet, appears regularly at premier venues nationally. Most recently, they played to a sold out crowd at the Kennedy Center in Washington, D.C. Although clearly the guiding force behind the ensemble, Harper has surrounded himself with talented young guardians of the jazz tradition, including Jon Notar, Ameen Saleem, Josh Evans, Stacy Dillard and Alioune Faye.

The World Stage is an educational and performance arts gallery in Leimert Park Village, the heart of LA's African American cultural community. The Stage, as it is affectionately called, was founded in 1989 by the late world renowned master jazz drummer Billy Higgins and by poet and community arts activist Kamau Daood in an attempt to fill a cultural void that existed in the Los Angeles community. Initially formed as a loose collective of artists and arts supporters, the World Stage has grown to assume a pioneering and pivotal role in the flowering of an arts movement in Leimert Park that has been hailed as the black cultural mecca by the Los Angeles Times.

To learn more about about Exalt Entertainment Group, please contact Brenda Bradley at 313.657.2750 or [email protected] or visit exaltjazz.com.

To find out more information regarding the Theater at 4305, The World Stage or event specifics, please contact Clint Rosemond at 213-952-4665 or visit theworldstage.org