Each reissued album contains new stereo mixes done by Nick Davis. They are presented in heavyweight gatefold sleeves that feature the original covers, faithfully reproduced from their original sources. 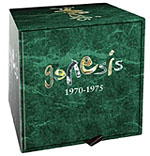 Five-Album Boxed Set Will Be Available April 14 from Rhino

LOS ANGELES — After upgrading the Genesis catalog of studio albums with a trio of comprehensive boxed sets, Rhino brings the band’s early years back to their vinyl origins with GENESIS 1970-1975, a boxed set that contains five albums with lead singer Peter Gabriel. The collection, on 180-gram vinyl, will be available April 14 from regular retail outlets, genesis-music.com and rhino.com for a suggested list price of $149.98.

Each reissued album contains new stereo mixes done by Nick Davis. They are presented in heavyweight gatefold sleeves that feature the original covers, faithfully reproduced from their original sources. All of the albums are collected in a protective slipcase.

One of the top-selling recording artists of all time, Genesis has sold more than 150 million albums so far. This five-album set collects some of the band’s most adventurous and ground-breaking records, covering Gabriel’s tenure with the group.

Featuring favorites like “The Knife" and “White Mountain," Genesis' second album, Trespass (1970), marked the beginning of a five-year journey that saw the band create ever-more daring albums of progressive rock. The album includes guitarist Anthony Phillips and drummer John Mayhew, who were replaced on the following album by Steve Hackett and Phil Collins respectively.

Nursery Cryme (1971) opens with “The Musical Box," a beautiful 10-minute sprawl that captures the essence of the band's sophisticated musicality tweaked with freewheeling theatrics. Genesis' new lineup starts to define its unique voice on songs like “The Return Of The Giant Hogweed" and “The Fountain Of Salmacis."

The band returned the following year with Foxtrot (1972), a breakthrough album hailed by critics and embraced by fans, especially in England where it reached #12. Two tracks in particular – “Watcher Of The Skies" and “Supper's Ready" – became live staples for years to come. Nearly filling the album's second half, “Supper's Ready" stands as an avant-garde showcase for each member's individual talents.

Genesis' popularity continued to grow with its fifth studio album, Selling England By the Pound (1973). These eight songs find the band's inventive storytelling and imaginative arrangements coming into sharper focus with “I Know What I Like (In Your Wardrobe)" – Genesis' first hit single in the U.K. The album also introduced audiences to “The Cinema Show" and “Firth Of Fifth," songs that would become popular concert staples.

The Lamb Lies Down on Broadway (1974) is a double album about a Puerto Rican hood searching for his brother. It was to be Gabriel's final release with Genesis. The band toured for the album, performing the entire 90-minute album along with an ambitious stage show complete with costume changes, theatrical lighting, and pyrotechnics. The title track, “Carpet Crawlers" and “In The Cage" remain popular parts of the band's live show.

For additional information regarding Genesis 1970-1975, please contact Christoph Buerger by email in the Rhino Records Media Relations Department, or at 818-238-6248.


The Lamb Lies Down on Broadway (1974)
Side One
“The Lamb Lies Down On Broadway"
“Fly On A Windshield"
“Broadway Melody Of 1974"
“Cuckoo Cocoon"
“In The Cage"
“The Grand Parade Of Lifeless Packaging"
Side Two
“Back In N.Y.C."
“Hairless Heart"
“Counting Out Time"
“Carpet Crawlers"
“The Chamber Of 32 Doors"
Side Three
“Lilywhite Lilith"
“The Waiting Room"
“Anyway"
“Here Comes The Supernatural Anaesthetist"
“The Lamia"
“Silent Sorrow In Empty Boats"
Side Four
“The Colony Of Slippermen: The Arrival/A Visit To The Doktor/The Raven"
“Ravine"
“The Light Dies Down On Broadway"
“Riding The Scree"
“In The Rapids"
“It."