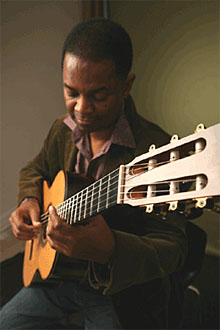 Luxury accommodations for each night on the package

Tickets to main event concerts each night with priority seating

New This Year: At The Movies With Earl Klugh

An additional night of entertainment is available on Wednesday, November 14th, when we take Earl Klugh’s other passion, The Movies, and screen a very special film in true Weekend of Jazz fashion, on a huge screen on The Grand Lawn of The Sanctuary. In Conjunction with the Charleston International Film Festival, we’ll be presenting the award-winning film Crazy: the story of legendary guitarist Hank Garland. Director/Writer/Producer Rick Bieber will also be on-site participating in the screening.

Weekend of Jazz at Kiawah Island has limited availability, so don’t miss this unique opportunity. Plus, all two, three and four night package guests will also be automatically entered to win a VIP dinner with Earl Klugh at the event! To place your weekend reservation, please call Kiawah Island Golf Resort at 1-800-654-2924 or visit kiawahresort.com. For more information and all of the latest details on entertainment, visit weekendofjazz.com/Kiawah or send an e-mail to [email protected] with your name and zip code to receive regular Weekend of Jazz updates right to your computer.

GRAMMY®-winning guitarist EARL KLUGH’s career of more than four decades includes over 200 compositions, more than 30 full-length albums, hosting and producing his own events, work in film and numerous world tours. Klugh’s work has earned him 12 career Grammy nominations; the most recent for his critically acclaimed release The Spice of Life. Klugh has been hailed by The New York Times,“…a guitarist with impeccable technique” and is looking forward to his third annual Weekend of Jazz at Kiawah Island. “I am so happy to be back again with a great lineup of artists and friends!,” says Klugh. “I hope you will join us in November for a great Weekend of Jazz!”

Located just south of Charleston, South Carolina, along 10 miles of pristine beach, Kiawah Island Golf Resort was recently named the No. 1 golf resort on the U.S. Mainland by readers of the prestigious Conde Nast Traveler magazine. The publication also named Kiawah as the No. 3 overall resort on the U.S. Mainland. Tennis magazine named it the No. 3 tennis resort in the U.S. Kiawah Island is also known as one of the top eco-friendly resorts in the U.S., and its beach was named one of the 10 best beaches in America by famed “beachologist,” Dr. Stephen Leatherman, aka Dr. Beach. It includes The Sanctuary—a AAA Five Diamond and Forbes Five Star-rated, 255-room hotel and spa—and 600 private villas and luxury homes. The resort has five championship golf courses, including The Ocean Course – host of the 1991 Ryder Cup, the 2007 Senior PGA and 2012 PGA Championship.