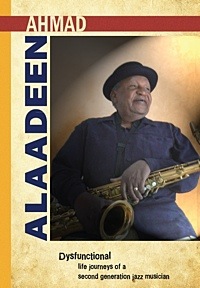 slideshow
Dysfunctional is the curious title of a gritty and revealing autobiography written figurative minutes before the passing on to ancestry of a Kansas City treasure, master saxophonist Ahmad Alaadeen. Subtitled “life journeys of a second generation jazz musician," that's precisely where Alaadeen places himself in the jazz lineage&#151among the second generation of musicians who came up through the world of music, likely because he was among the generation that came up at the tail end of the so-called swing era and the beginnings of what became known as bebop. Here's the blurb I wrote for the cover of this rewarding read:

“Ahmad Alaadeen is one of those musicians every community should treasure; the master-level musician who avoids the jazzman's siren call to New York and instead remains at “home"; enriching his preferred environs with the wealth of his talents and sheer give-back spirit," and Ahmad Alaadeen certainly gave-back to the Kansas City community. “His story is full of cautionary tales and triumphs over adversities, of music made and music lost, of unstinting life lessons and subsequent sage observations, and ultimately of contributing to the music which gave him so much sustenance. This is a book that every aspiring jazz musician should read and take heed, for Ahmad Alaadeen is certainly dropping science on his readers. He pulls no punches, reveals both the grit and the triumph, ranging from growing up to Jay McShann's magnetic music in the 'hood, to the music he ultimately called his own. Dysfunctional is a curious title, for this is a man who surely functioned in the world he ultimately chose, and did so with great grace and humility."

You can learn more about this book and this under-recognized master at Alaadeen.com. Dysfunctional is available on Amazon.com in hard copy and Kindle edition.