SOURCE: ALL ABOUT JAZZ PUBLICITY
June 20, 2007
Sign in to view read count 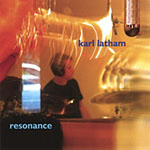 slideshow
"Karl Latham leads the band through all kinds of musical terrain with a playful, musical touch, from the elaborate shading to the sparse, funky backbeats. Latham likes playing inside and out, and his band follows suit nicely." - Robin Tolleson, Modern Drummer

KARL LATHAM is a NY-based and internationally recognized drummer. He is known for his exceptional ability to dig into a variety of musical styles, playing straight-ahead jazz, avant-garde, funk, rock, Latin, and more. John Lee, bassist and director of the Dizzy Gillespie Alumni All-Stars, says that “Karl's greatest strength is in his versatility. In this respect, he is something of a phenomenon, having mastered every style of music he has attempted to play." Karl has collaborated with a wide spectrum of artists such as Mark Egan and currently plays with the Johannes Mossinger New York Trio alongside his bandmate on this solo effort, Kermit Driscoll.

Karl grew up in Trenton, New Jersey, and began experimenting with drums at the age of 7. As a college student, Karl won second place in the 1983 Carmine Appice National Drum Battle. Karl received a B.S.S. from Ohio University and studied music performance at Rutgers University, Ohio University and Berklee College of Music. His accumulation of degrees provided a strong foundation in exploration of different musical styles and drumming variations.

On his latest release, Resonance, Karl joins forces with guitarist JOHN HART, bassist KERMIT DRISCOLL, and trumpeter VINNIE CUTRO to create original jazz versions of some of the world's most beloved pop songs. Resonance begins with a strong rendition of Stevie Wonder's “Higher Ground," and transitions with ease and eloquence into U2's “Still Haven't Found What I'm Looking For" and the Jimi Hendrix classic, “Spanish Castle Magic." This album displays Latham's ability to “pack a surprising rhythmic punch" (Modern Drummer). With his funk beats and varied time signatures, Karl's bandmates also bring talent and an extensive education to the table. Driscoll has performed with The New York Philharmonic under Kurt Masur, Cutro has played alongside giants such as RAY CHARLES and BLOOD SWEAT AND TEARS, while Hart has been a leading recording artist on the Blue Note label and played with TERUMASA HINO and LARRY GOLDINGS.