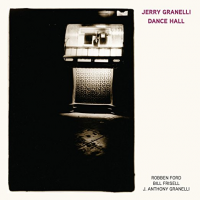 slideshow
Back in 1992, veteran drummer-composer Jerry Granelli went to studios in Seattle and San Francisco with an all-star cast, including trombonist Julian Priester, alto sax great Kenny Garrett, bassist Anthony Cox and guitarists Bill Frisell and Robben Ford, to record a set of blues-based tunes that resonated with his youth. The resulting album, A Song I Thought I Heard Buddy Sing, inspired by Michael Ondaatje's haunting novel “Coming Through Slaughter" about the life of the legendary New Orleans cornetist Buddy Bolden, includes blues-tinged nuggets as Johnny Hodges' “Wanderlust," Charlie Parker's “Billie's Bounce," Ornette Coleman's “Blues Connotation" and Screamin' Jay Hawkins' “I Put a Spell on You."

Twenty-five years later, Granelli returned to the studio with the same producer from that landmark session, Lee Townsend, along with the same guitar tandem of Frisell and Ford for another blues-soaked outing. Inspired by his upbringing as an aspiring musician in San Francisco, Dance Hall, is at once a joyful reunion and a fond salute to his own youth. “This is the bookend," said the revered, 76-year-old drummer from his home base in Halifax, Nova Scotia. “When I told Bill and Robben I wanted to make another blues record, they both said, 'I'm in.' It took about a year to get everybody in the same place, but it was a great session. This record really meant a lot to me. There's magic on these tracks."

Granelli's 20th album as a leader has him tackling hit singles from yesteryear, including The Platters' “The Great Pretender," Dinah Washington's mournful “This Bitter Earth," Fats Domino's “Ain't That a Shame" and Louis Jordan's “Caldonia." He also tips his cap to Max Roach on a dramatic reading of “Driva Man" (from 1964's pivotal protest record We Insist! Freedom Now Suite featuring singer Abbey Lincoln) and to Charles Mingus on a straight shuffle version of “Boogie Stop Shuffle." An earthy reading of “Meet Me in the Morning" represents one of the artists Granelli knew from the early days of the Fillmore West in San Francisco, Bob Dylan. The drummer explains that his laid back, behind-the-beat groove on this Dylan tune was more inspired by a funkier version by Texas bluesman Freddie King from his 1975 album Larger Than Life. Aretha Franklin is also represented here with a newer tune, the gospel-tinged “Never Gonna Break My Faith" (from the 2006 movie Bobby about the death of Bobby Kennedy). “I heard that song on a plane and I just felt, 'That's the time we're in, that's what we gotta do now," Granelli maintains. “We gotta stand and not let these motherfuckers break our faith.'"

When Granelli and producer Townsend began talking about the project, Granelli stated he wanted the album to be “personal." Townsend replied, “That's it, find it from there." This is how Granelli was able to develop personal connections to each of the songs. “'Ain't That a Shame' has a story behind it. I was in high school and had just met the woman who would become my first wife. I just fell in love, walked around the corner to a record store and I remember that song was playing. I was not yet 20 when I first heard Dinah Washington single, 'This Bitter Earth.' After that I would sit in this bar every day, drinking gin and tonics, trying to feel melancholy and capture the sadness of that profound song. It's so gorgeous. Louis Jordan is someone I grew up listening to and his 'Caldonia' in particular is how I learned to play quarter note triplets on the drums. So I had all of those songs memorized as a kid, and every one of them meant something real to me. And as far as 'The Great Pretender,' I toured with The Platters when that song was popular, so I must've played it hundreds of times."

The core quartet- Granelli on drums, Frisell and Ford on guitars and Granelli's son J. Anthony Granelli on bass- puts its stamp on “Boogie Stop Shuffle," “Driva Man," “This Bitter Earth" and “Never Gonna Break My Faith." A punchy three-piece horn section, arranged by Steve Bernstein of Millenial Territory Orchestra and Hot 9 fame, are augmented on four other tunes- “Meet Me in the Morning," “The Great Pretender," “Ain't That a Shame" and “Caldonia." Granelli, who has cultivated a two-guitar sound in his previous bands V-16 and UFB, says he fell in love 20 years ago with that combination from the Frisell-Ford hookup he heard on A Song I Heard Buddy Sing. “I just always loved that sound, where it's like two guitars meshing into one big guitar to the point where you can't tell who's playing what."

For the drummer and educator, who is approaching 77 in December, Dance Hall represents a return to the fundamental desire to play the blues. “I've gone through a lot of phases in my career, starting out playing straight ahead in piano trios led by Vince Guaraldi and Denny Zeitlin, then playing that right-in-the-pocket Mississippi-Louisiana thing with Mose Allison in the '70s. I've gone through the 'out' stuff with free jazz and all that. But the beauty of playing this instrument, the drums, is playing time for people who can just do it and use it. And these guys really know how to use it.

“Everybody did this session as a labor of love all the way down the line," he added. “There was a lot of laughing, a lot of joy at the sessions. It was a real love fest. And to me, personally, it just feels like artistic freedom has finally been reached with this recording, where you can actually do what it is that you love. For me, it feels like a pretty outrageous record to make at this point in my life. Just to play the drums that way...that's what I grew up in. I can't wait to get on the road and play this music and see what happens. That's the next step."