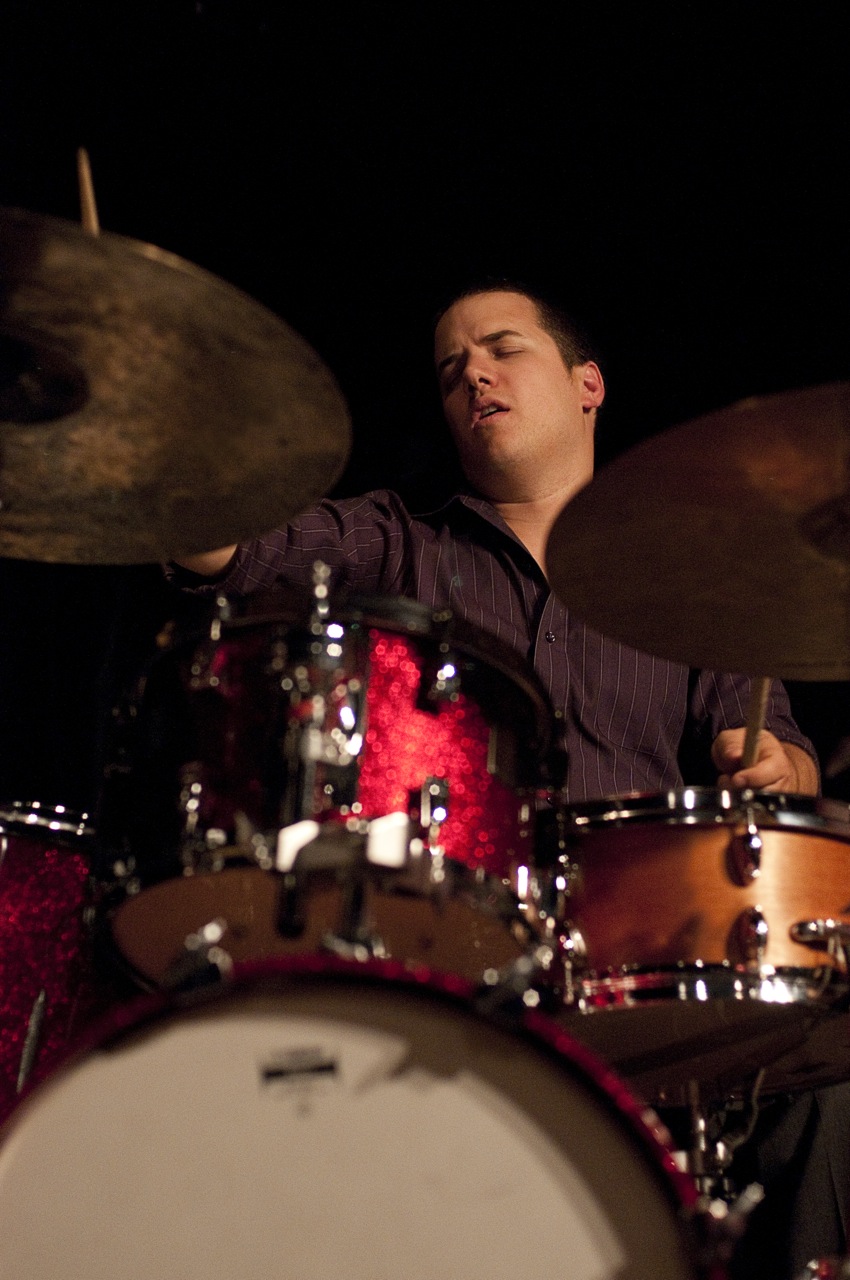 On February 3, 2015, Anzic Records proudly releases the much-anticipated fourth recording from drummer/composer Ernesto Cervini, titled Turboprop. On the heels of his third album, There, which featured his quartet recorded live at the Cellar Jazz Club in Vancouver, BC, Cervini added two incredible musicians to the fold to create an exciting new sextet he calls Turboprop. The band is comprised of his working quartet with Joel Frahm (tenor saxophone), Adrean Farrugia (piano), Dan Loomis (bass) & Ernesto Cervini (drums), plus Tara Davidson (alto & soprano saxophone) and William Carn (trombone). The sound of Turboprop, produced by Oded Lev-Ari, is sophisticated and soaring, reminiscent of the hard swinging Jazz Messenger bands of Art Blakey, and able to offer an extraordinarily wide range of repertoire; from Charlie Parker to Claude Debussy, plus originals from all the band members. Turboprop has already toured Canada to rave reviews, and will be celebrating the release with concerts across Canada and the U.S.

Cervini, who Hank Shteamer of Time Out New York called, “a tastefully buoyant drummer as well as a sharp composer and bandleader", conceived of Turboprop as blades of a propeller that work together in synergy, moving an aircraft powerfully through the sky. Cervini elaborates, “by combining the experience and artistry of these musicians, the music takes flight with a force and energy that only a sextet can bring. This band has been a wonderful conduit for my compositions and arrangements and all of the members have taken a very personal approach to the pieces, embracing the emotion and sentiment that this group brings to every note we play." Producer Lev-Ari added that, “I was really excited to produce this album, as I love a 3-piece front line, and it's a sound that is rarely heard anymore. I knew it would be a strong vehicle for Ernesto's writing and arranging. Since the band had just gotten back from a tour days before getting into the studio, the music was well-rehearsed and had this unmistakable 'live' feeling. We captured great performances, and could easily fill two albums with strong music. Ernesto is simply an incredible musician and bandleader and this recording really captures his essence as a multifaceted creative force."

Highlights on Turboprop include, “Cheer Up Charlie", a lovely ballad from the film Charlie and The Chocolate Factory, that Cervini and his wife sing to their baby boy; “Three Angels", another very special piece for Cervini, composed for his three nieces who passed away unexpectedly; and the third ballad on the album called “Marion Theresa", which was written for Cervini's grandmother.

Turboprop however is anything but an all ballads album, and, “Cervini exemplifies 'float like a butterfly, sting like a bee' . . . turning drums into a rainforest symphony"- Ken Micallef, DownBeat Magazine. Sprinkled around these emotional compositions are upbeat, anthemic tunes including, “Unnecessary Mountain", which was named after a mountain in the Rockies; “Bindi Bop", inspired by Cervini's trip to Australia; “Fear of Flying", which Cervini wrote for all those with Pteromerhanophobia; and “De Molen", a great burner by saxophonist Joel Frahm.

In addition to the compelling originals, Turboprop also sunk their teeth into some “standard" tunes that they love to play, including “Red Cross" by Charlie Parker, and “The Windup" by Keith Jarrett, and Cervini's arrangement of the gorgeous Claude Debussy piano etude, “The Engulfed Cathedral".

There's an old saying in aviation; “Accidents happen when you run out of experience." In the case of Turboprop, the music is clearly in good hands.

More on Ernesto Cervini: Innovative and electrifying, Toronto jazz drummer Ernesto Cervini, who has shared the stage with many legendary musicians such as Joe Lovano, Clark Terry, Benny Golson, Cleo Laine, Pat LaBarbera, Dick Oatts, Buddy DeFranco, Eddie Daniels, Scott Robinson, Dave Binney, Jim McNeely, and many others, has energy to burn, whether radiating it from behind his drums or working on any number of musical and educational projects. Cervini's diversity as a musician (he is also an excellent pianist and clarinetist) has allowed him to travel throughout the world, performing in some of the world's greatest jazz venues such as Smalls, Birdland, The Jazz Standard, The 55 Bar, The Montreal Bistro, The Top Of the Senator, The Rex Jazz and Blues Club, and also many of the world's most prestigious concert halls, such as Massey Hall, The Glen Gould Theatre, The St. Lawrence Center for the Arts and the Sugita Theatre in Yokohama, Japan. His second album, Little Black Bird, recorded with his quartet was celebrated loudly by DownBeat Magazine with a four-star review. His joyous and engaging third recording, There, released in 2011, is now followed up on with the artist's most irresistible work to date, Turboprop (Anzic Records, February 3, 2015).