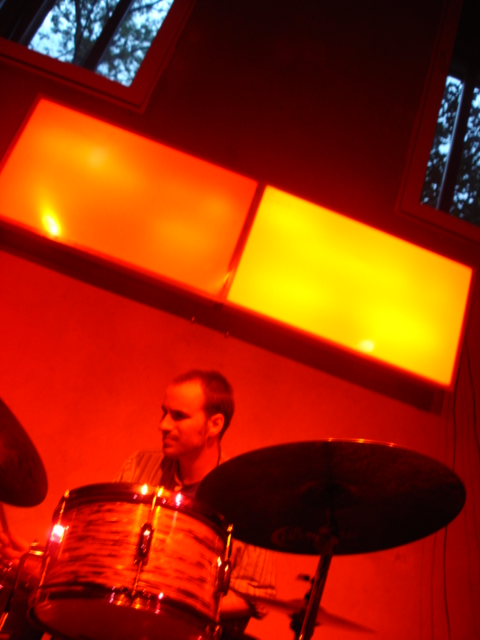 Drummer-composer Devin Gray, one of the most promising musicians on the New York scene, makes a dream of a debut as a leader with the album Dirigo Rataplan, to be released by Skirl Records on April 10. Gray’s gifts as a creative composer and soulful player can be judged by the company he keeps; the studio set sees the 28-year-old, Brooklyn-based drummer lead a quartet featuring three veteran improvisers, each a top-class leader on his own: saxophonist Ellery Eskelin, trumpeter Dave Ballou and bassist Michael Formanek. The music ranges from the Don Cherry-evoking “Quadraphonically” to the Charles Ives homage “Prospect Park After Dark,” with Dirigo Rataplan showcasing Gray’s writing for this specific mix of master musicians. The result is a seamlessly organic, engrossing mix of composition and improvisation, structure and freedom.

Gray and company will celebrate the album’s release with performances April 12 at Cornelia Street Café in Manhattan, April 22 at The Windup Space in Baltimore, and June 6 at Barbès in Brooklyn. The Baltimore gig will be a homecoming, with each of the musicians having ties to the town. Other dates will be listed at www.devingraymusic.com.

Gray met Michael Formanek while a student at the Peabody Conservatory in Baltimore, where the bassist is on the faculty. The drummer wasn’t even driving age when he met Dave Ballou at jazz camp in his native Maine. With Ballou on the faculty at Towson University near Baltimore, the three eventually developed their rapport playing in a local trio. Ellery Eskelin, a Baltimore native and a more recent influence, joined to complete a searching quartet that has performed the drummer’s material at clubs in New York and Baltimore. Gray says: “Mike, Dave and Ellery are heroes of mine – I have such respect for them as musicians and men. They can play anything – they can swing, they can read, they can play free – so it was a real challenge for me to challenge them, to find interesting ways to spur them. It was an incredible opportunity, too, and fun.”

The title of Dirigo Rataplan comes from “dirigo,” meaning to direct or lead in Latin, and “rataplan,” which is French for the beating of hooves, or of drums – so it denotes leading from the beat. And Gray is a native of Yarmouth, Maine, where “dirigo” is the state motto. “Being from Maine, I come from the woods, basically,” Gray says. “It’s as quiet as can be up there. I started playing the drums as a boy just to fill the air with some noise. That said, the noises you do hear there are beautiful, the sounds of nature. So I was always conscious that if I were going to put my own sounds out there, they had better be good ones – as organic and meaningful and beautiful as you can make them. That ideal is always inside me when I make music.”

Formanek – whose three-decades-plus career as a top bassist-composer has never been more fruitful, with his 2010 ECM release as a leader, The Rub and Spare Change, earning rave reviews the world over – says it was striking how quickly Gray went from student to peer. “Devin has always been one of those natural drummers, with this organic rhythmic energy that you can just feel,” the bassist notes. “But more than that, he has become this very creative musician. His music has its own personality, which is the goal for any artist. The pieces are free and open with a lot of room for improvisation, but the tunes have an intrinsic rhythmic and melodic character to them, too, this color and energy. And with the quartet having played together a fair bit, the sessions for the album just felt good, with all of us committed to no other agenda than making good music together, real music.”

In addition to nine albums as a leader for such labels as ECM, Enja and Screwgun, Formanek has recorded and performed with artists from Freddie Hubbard, Joe Henderson and Dave Liebman to Uri Caine, Elvis Costello and, one of his kindred-spirit partners, saxophonist Tim Berne. Formanek’s band for The Rub and Spare Change, featuring Berne, pianist Craig Taborn and drummer Gerald Cleaver, has a second album due for release in fall 2012. To Gray, what is most impressive about the bassist “is not just that his tone and sense of time are so incredible or that his palette is so vast,” the drummer says. “It’s also that he cares so much about doing whatever he can to ensure the quality of the music in front of him. I feel a total, unspoken trust with him.”

Ballou has made nine albums as a leader or co-leader over the years, in addition to performing as a soloist for the likes of Gunther Schuller, Andrew Hill, Maria Schneider and John Hollenbeck. The trumpeter was also recently awarded a Maryland State Arts Council Individual Artist Award for Music Composition. Gray says he had Ballou’s “very lyrical sound in mind” when he conceived Dirigo Rataplan, writing melodic lines especially for him.

As a player and composer, Eskelin has made a name for himself in bands ranging from drummer Joey Baron’s Baron Down group in the ‘90s to the saxophonist’s own long-lived trio with accordionist Andrea Parkins and drummer Jim Black, which recorded a series of artful, influential of albums for the hatHUT label. Eskelin’s musical purview is wide as they come, from improvisatory duos with drummer Han Bennink to a trio devoted to the music of Gene Ammons with guitarist Marc Ribot and drummer Kenny Wollesen to soloing over the art-rock electronica of the Grassy Knoll. “Ellery can play anything and sound like himself, whether it’s `How High the Moon’ or something like ‘Thickets’ on my album,” Gray says. “He’s a wizard in that way.”

As for Gray, he recorded the 2005 album Wolf Walk with the high-octane trio Corpulent featuring veteran saxophonist Gary Thomas and bassist Joel Grip, and he has learned much from the example of such key mentors as drummer Gerald Cleaver (dedicatee of the tune “Thickets”). Gray says: “Leading from the drums is very different than doing it from another instrument, a piano or a horn. You’re not playing notes, per se, so you have to lead on another level, with energy and imagination. And whether it’s a past great like Tony Williams or guys like John Hollenbeck and Gerald, I aspire to that plane – not to be a drummer-drummer but a musician-drummer. The music you’re making for people is always the point.”