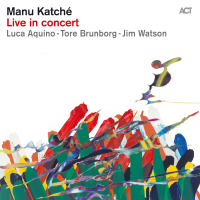 slideshow
“Anyone who heard the quartet play last year will want this chronicle of a rapturously received night’s work.” —John Fordham, The Guardian (review of Live in Concert)

“Manu Katche is a drummer of watchful effervescence, attuned to the tiniest particulars of rhythm and timbre but intent on a feeling of unthinking ease” —Nate Chinen, The New York Times

Manu Katché, one of the world’s most renowned drummers & bandleaders, joins the ACT Music family of artists for his new release Live in Concert. Katché has long been esteemed for his work with pop greats Peter Gabriel and Sting, along with countless others. This is all the more impressive once one considers Katché’s vast and impressive work as a jazz drummer, most notably as a long-standing member of the Jan Garbarek Group. Katché is also known for having hosted the television show “One Shot Not” on the French TV channel, Arte, which found him amongst countless master musicians across genres.

His long-standing quartet, comprised of Jim Watson on Hammond B3 organ and piano, Luca Aquino on trumpet and Tore Brunborg on saxophones and synth bass, have fostered a deep rapport given their extensive European touring, which made the decision for a live record all the more compelling.

ACT founder Siggi Loch speaks highly of Katché. “My shortlist of the greatest drummer-bandleaders in the history of jazz includes Warren ‘Baby’ Dodds, Chick Webb, Buddy Rich, Max Roach, Art Blakey, Elvin Jones, Tony Williams, Jack DeJohnette; and in the modern era, Wolfgang Haffner, Brian Blade and Manu Katché.” Loch continues, “I’m a true fan. In the 22-year history of ACT, I avoided signing already established and successful artists. Our main focus always was and will be on the discovery of young, new talents. But I just couldn’t resist signing Manu Katché. After his manager called me, I was on the next plane to Paris to meet one of my idols in person. I am very pleased that he is now a member of the ACT family.”

Katché shares Loch’s enthusiasm for the partnership. “I am happy to be a part the ACT label that, for more than 20 years, has managed to develop a catalogue of European artists which I feel close with, and which is sensitive to the music I compose.”

Both as a live and studio musician Manu Katché is one of the great drummers of our time. Time and time again, musicians and producers have sought out Katché for his unique style, which stems from his distinct mixture of elegance and power. As Peter Gabriel’s drummer of choice, Katché was hugely influential on the hit, “Sledgehammer” and, more recently, as the focal point of Gabriel's live band on the “Back to Front” World Tour. Katché’s long-running affiliation with Sting is also a key aspect of his career, again his distinctive style lending itself to Sting’s biggest hit, “Englishman in New York”.

Katchè’s work as a composer and bandleader is an equally integral part of his career. He has released seven internationally acclaimed albums under his own name. His music is distinguished by his sense for precise, melodic, catchy themes; it’s unique flow and deep sense of atmosphere. It is testament to Manu Katché’s genius that both these sides of his musical personality—the outstanding drummer and sound-magician, and the composer and bandleader—complement each other so perfectly.”