SOURCE: ALL ABOUT JAZZ PUBLICITY
July 16, 2007
Sign in to view read count 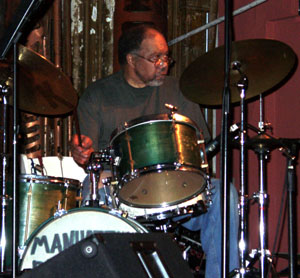 slideshow
Drummer Alvin Fielder grew up in Mississippi, but the fruition of his musical career in Chicago came in the 1960s, when he worked with Sun Ra and appeared on Roscoe Mitchell's legendary Sound (Delmark, 1966) LP, one of the first AACM recordings to be released. After returning to a pharmacy career in Mississippi in the late 1960s, Fielder began working regularly with New Orleans saxophonist Kidd Jordan in the Improvisational Arts Ensemble.

A relationship that spans over thirty years, Fielder and Jordan have collaborated frequently with bassist William Parker, pianist/saxophonist Joel Futterman, and tenor man Fred Anderson among others. Steeped in the music's history, and especially that of the drummers, Fielder took time out from his schedule to speak with writer Clifford Allen in late 2005. Unpublished until now, the writer feels that--on the heels of a 2006 tour with Jordan and the release of Fielder's 2006 Clean Feed Records debut (featuring another longtime collaborator, Dallas-based trumpeter Dennis Gonzalez), A Measure of Vision--now is most definitely the time.

Check out Alvin Fielder: It's About Time at AAJ today!