Drew Gress Featured on NPR's Fresh Air with Terry Gross and in the NY Times! 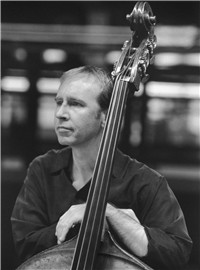 slideshow
Bassist/Composer Drew Gress ON TOUR In Support + Celebration of The Irrational Numbers, His Third Album for Premonition

“Much as Gress likes aggressive playing, he doesn't deny his love of good melody. On The Irrational Numbers, the way he plays those tendencies off each other may be one more way he defeats expectations. But it's not like musicians have to choose. Why not have it all?" - Kevin Whitehead on NPR's Fresh Air

“If there's still any line in the sand between “inside" and “outside" in postmodern progressive jazz, here comes Mr. Gress with his rake and trowel. . . . it's natural that Mr. Gress would provide this album's adhesive as well as its anchor, but the results still feel rewardingly like a surprise." - Nate Chinen, The New York Times

Dates Scheduled for: The Jazz Standard in NYC on March 26 (www.jazzstandard.com),

The Walker Art Center in Minneapolis on March 28, (www.walkerart.org),

+ A Masterclass/Workshop at David Gage's shop in NYC on April 15! (www.davidgage.com)

Premonition Records is proud to announce the release of The Irrational Numbers, by bassist/composer Drew Gress. With The Irrational Numbers, his third for Premonition, Gress adds another stellar album to his already impressive discography of smart and uncompromising modern jazz. The album features the same core group of players who appeared on Gress' previous Premonition album, the critically acclaimed 7 Black Butterflies including Tim Berne on alto saxophone, Tom Rainey on drums, Craig Taborn on piano, Ralph Alessi on trumpet along with Gress on bass and electronics. In support and celebration of The Irrational Numbers Gress will be leading this ensemble in CD Release Celebration Performances at The Jazz Standard in NYC on March 26, at The Cultural Center of Chicago on March 27 and at The Walker Art Center in Minneapolis on March 28. In addition, Gress will be offering a masterclass/workshop at the renowned shop of David Gage in NYC on April 15.

Click here for the NPR “Fresh Air" review of The Irrational Numbers: http://www.npr.org/templates/story/story.php?storyId=19096948

With The Irrational Numbers, Gress continues to develop a rare alchemy in jazz: the seamless merging of a disciplined harmonic and melodic structuralism with freewheeling and open-ended improvisations. Previous efforts have emphasized the blowing, after all, this is a group of musicians who can, and will, play anything. With The Irrational Numbers, however, Gress leans more on the compositions and on his own emphatic bass playing (there are six Gress solos on the album).

“This Irrational Numbers is the next chapter in this band's evolution, which hopefully benefits from a little intelligent design," says Gress. “We've toured throughout the world in the two years since 7 Black Butterflies and I think we've developed a personal language and way of improvising that is ever changing, and rapidly so. I really dig this inside/out take we seem to have on the traditional Dixieland mode of simultaneous improv that is creating some wild energy on stage. Tim and Ralph have a super-conversational way of playing together and when Craig jumps in on that it sounds like Jelly Roll Subotnik has joined the party. This vibe is what “Blackbird Backtalk" is built upon, as is much of “Fauxjobim."

“As for the writing, I've been intensely focused on blurring the lines between composition and improvisation, on engaging the listener's subconscious by bringing motivic unity into play throughout the album, searching for fabric to bind the pieces together as a unified whole," says Gress. “The listener will hear things early in the record that reappear much later. I guess that amounts to a cinematic approach. My goal is to achieve that sense of improvisational inevitability, without the listener's conscious awareness. Irrational? You tell me."

The album adds 10 new Gress compositions to his already sizable canon of works. Among these, the standouts include, “Chevelle," a long form piece with angular harmonies, a post-surf groove and plenty of blowing, “By Far," spotlighting David Torn's uniquely beautiful production, and “True South," which closes the album with a haunting solo electronic instrument built specifically for Gress.

To sum up, Gress says, “I'd like to call special attention to the endings of each piece, which are a fascinating part of the listening for me. They highlight the fact that this is a band with a composer's mind and an improviser's heart. And, of course, there is David Torn's amazing ability to envelope the music in a hypermodern supersonic space that gives these new sounds a true home. He is the most knowing of individuals."