SOURCE: ALL ABOUT JAZZ PUBLICITY
May 16, 2008
Sign in to view read count 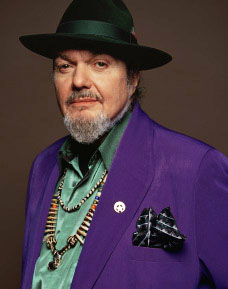 slideshow
Iconic American musician and unofficial ambassador to New Orleans, the legendary Dr. John (aka Mac Rebennack, Jr.) has signed a multi-record agreement with the Savoy Label Group's 429 Records which will release “City That Care Forgot" on June 3rd. With the help of guests such as Eric Clapton, Willie Nelson, Ani Di Franco and Terence Blanchard, Dr John fuses the blues, funk and soul in his distinctive and irrepressible swamp-voodoo style and comes up with a bold and heartfelt homage to his hometown in response to the tragedy that is post-Hurricane Katrina New Orleans. It's an elegant, elegiac and angry collection of songs - 14 tracks offering up barrelhouse funk, freewheeling swamp rock and voodoo-inflected piano grooves all anchored by Dr. John's legendary gravelly drawl.

Dr. John, not surprisingly, doesn't pull any punches on “CITY THAT CARE FORGOT" as he unleashes the pent up frustrations of a community let down by the ineptitude of a seemingly unconcerned government. Both polemical and thought provoking, it contains the most politically charged lyrics to date. The 14 tracks reflect a wide range of emotions - from the riveting and angry title track that features the blisteringly fierce guitar-work of Eric Clapton, to the loping, blues-inflected “Time For A Change" (which could be considered a “What's Going On" for the You Tube generation), to the country swagger of “Promises, Promises" (which features Willie Nelson on vocals). Despite the amount of righteous wrath contained in the lyrics, the record still manages to provide a riotously good time.

“CITY THAT CARE FORGOT" is a bold musical statement and a cry for justice and humanity from an artist who is inseparable from the vibrant and colorful culture of the Crescent City. Says Mac in the Times-Picayune newspaper: “This is only the second time I made a record solely for the people of New Orleans. If it helps anybody down there to get any of their piss-offedness out, it it helps anybody down there in any way - good. This is a record I just could not not do. I couldn't have lived with myself if I didn't make this record."

His career began as a New Orleans-based session musician back in the 1950s playing with legends like Professor Longhair, Art Neville and Joe Tex. He went on to develop his distinctive voodoo-inflected rhythm and blues psychedelia throughout the '60s and '70s recording. Possibly his best work in two decades, “CITY THAT CARE FORGOT" is nothing short of a cultural event offered as up by an artist with deep roots in the city. A tireless advocate for the welfare of his beloved city, Dr. John will spend the rest of the year promoting the project and keeping its concerns in the spotlight. Activities include a showcase performance at the Triple A Radio convention in Philadelphia May 30th, a concert at the Hollywood Bowl on June 14th and a performance on David Letterman's show June 17th.

429 Records is a unit of the Savoy Label Group (SLG). SLG is the North American unit of CME (Columbia Music Entertainment), the oldest music company in Japan. The Savoy Label Group has evolved into a leading independent company in the adult music genres consistently outperforming competitors in key music categories as monitored by Billboard Magazine. SLG is lead by Steve Vining and CME is headed by Chairman Strauss Zelnick, founder of Zelnick Media which owns interests in and manages an array of media companies.