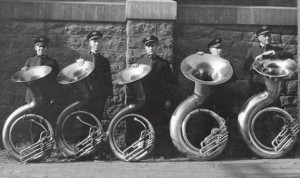 slideshow
Ken Field graciously shared his sense of the role of swarming. It really turns on the reappearance of music in the public square without the conventions of venue performance.

“Since the earliest days of my musical career I have always been attracted to the choral and contrapuntal sound of multiple iterations of the same instrument. Decades ago, when I was asked to add a sax solo to a track, I would invariably record multiple takes of the solo, and then ask if they could play them back with all the solos happening simultaneously. I would always state my preference for them to use them all together in the final mix, but of course no one ever did.

Years later, when I started recording soundtracks for film (mostly for my wife, animator Karen Aqua), the easiest and cheapest thing to do was to record multiple parts myself on saxophone or flute, rather than hiring additional musicians to play multiple melodic lines. Plus I liked the sound of it! It was not surprising that my first and second solo CDs, 1996's “Subterranea" and 1999's “Pictures of Motion," included many pieces incorporating layers of alto saxophones. My subsequent work has continued along these lines, right through my most recent solo release “Under the Skin." I have recently resurrected my old “Alto Saxophone Project," which consisted of 3 alto saxophones, bass, and drums, as an alto saxophone-only group called the “Alto Army." (We are performing at Somerville's Armory— how perfect is that?!—on May 13th at 8pm—the group will include Jorrit Dijkstra, Sagit Zilberman, Valerie Walton, Hilary Noble, and me, all on alto saxophones of course.)

When I was asked to participate in the planning of JazzBoston's annual JazzWeek event, I proposed a week long noontime series of concerts, each featuring multiples of a single instrument. Subsequently christened the Jazz Swarms, each concert will be led by a different prominent and creative Boston-area musician, who will be responsible for lining up their swarm, selecting material (or an improvisational approach), and leading the performance. The line-up of leaders includes trumpeter Jerry Sabatini (Monday), flutist Geni Skendo (Tuesday), me leading the sax swarm (Wednesday). percussionist Grant Smith (Thursday), and trombonist Tom Plsek (featuring the great Phil Wilson, Friday).

We are fortunate to have a great venue for these sonic explorations: the 1st floor atrium of the Massachusetts State Transportation Building at 10 Park Plaza, near Boston Common, is a wonderful, accessible, and sonically resonant space. The concerts will be free, open to the public, and we hope they will help to build further awareness of, and excitement about, the vibrant and creative Boston jazz scene."