SOURCE: ALL ABOUT JAZZ PUBLICITY
June 30, 2008
Sign in to view read count 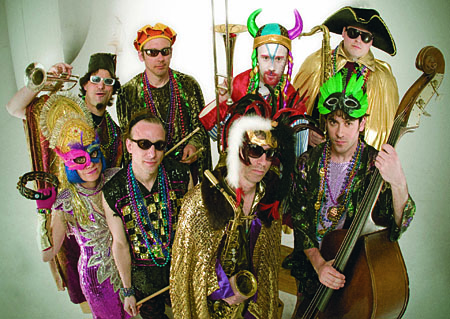 Dressed a la Mardi Gras in feathered masks and multi-colored, sequined costumes, playing music that riotously combines the rhythms of New Orleans brass bands with improvisation and heaping undercurrents of funk, the Revolutionary Snake Ensemble inhabits that rare musical planet on which Sun Ra, James Brown, George Clinton & Parliament Funkadelic, and a myriad of New Orleans marching bands jointly reside. Based physically in Boston since forming in 1990, the horn and percussion-based group is led by saxophonist/composer Ken Field, who describes it as “a funk and street beat brass band, playing New Orleans and other modern improvised celebratory styles." The Snake's music is rooted in the New Orleans tradition of jazz funerals - a tradition unique to the birthplace of jazz - which began with a 'first line' procession to the burial ground, a brass band playing hymns in a funeral dirge. Afterwards, there was a celebration of the deceased's life, with a 'second line' of musicians playing up-tempo music celebrating the miracle of life. Playing Field's original compositions and rearrangements of traditional tunes, opening up new avenues for improvisation, the Revolutionary Snake Ensemble celebrates, expands, and transforms the brass band tradition - a tradition, in the wake of Hurricane Katrina, that is now in diaspora.

A saxophonist/ composer/ improviser, Ken Field is one of Boston's most dedicated and versatile musicians. Since 1988, he has been a member of Birdsongs of the Mesozoic, a New Music/ chamber rock ensemble that began as a spinoff from the legendary Mission of Burma. Birdsongs has recorded seven internationally acclaimed CDs on Cuneiform Records, including the recent Extreme Spirituals, which features the bass/baritone of acclaimed African American vocalist Oral Moses. Field also has an active solo career. An improviser and composer of classical/New Music, he has performed internationally and released four solo discs [Subterranea (O.O.Discs), Pictures of Motion (sFz), Tokyo in F (Sublingual), and Under the Skin (Innova)]. Field has composed music for animation, film, and video, for Bridgman/Packer Dance, and for television, including music for Sesame Street and PBS. As a performer, he has worked as a sideman with countless renowned reggae, funk, R&B, rock, jazz, and world beat artists - and performed for former President Bill Clinton. Field is also the long-standing host of The New Edge, a Boston-based weekly radio show featuring a broad range of creative instrumental music.

The Revolutionary Snake Ensemble was formed in 1990 when Field assembled an improvisational horn and percussion group with trumpeter and cartoonist Scott Getchell to entertain at a pagan women's ritual celebration. Field decided to continue the project, conceiving it initially as an improvisational group rooted in Boston's free jazz/ improv scene. But the group “soon started playing some of my original pieces, plus obscure music by John Scofield, Sun Ra, Ornette Coleman, and others, mostly with a New Orleans funky marching groove," recalls Field. As New Orleans brass band and Mardi Gras music began playing ever-increasing roles in the band's repertoire, the Revolutionary Snake Ensemble came into its own. Speaking of the Snake's music as though it were a bowl of New Orleans gumbo, which begins with a classic roux, critic Dan Oullette noted that it “captures the abandon of a street parade while expanding its stylistic scope...it's got the essential ingredients spiced with fresh flavors". Performer Magazine noted that the band “may operate from the traditions of New Orleans music, but the boundaries are pushed wide open when they actually play. “We mostly play from 'head' charts, where everyone has the melody and chord changes in front of them. Since there's no guitar or keyboard, the horns can not only solo, they “even alter the harmonies spontaneously," Field said. “So there's a lot of improvisation. I also conduct some of the arrangements live" For both the band and its audiences, notes Performer, “doing all of the high art ministrations of improvisation and having an audible party at the same time really is the best of both worlds."

In 2003, the Revolutionary Snake Ensemble released their first CD, Year of the Snake, on Innova Recordings. Recorded in 2002, it included music by Field as well as Sun Ra, John Scofield, James Brown, and others, with liner notes written by two-time Grammy-winning New Orleans music producer Scott Billington. It also included a track, “Parade of Numbers", originally recorded for an animated counting piece on Sesame Street, a widely-broadcast children's television program. Year of the Snake brought the Revolutionary Snake Ensemble's music to an international audience. Receiving considerable public, radio, and press acclaim, the studio recording was included on best-of-year lists from New York City's NPR affiliate WNYC, the Gambit Weekly in New Orleans, and Radio Popolare in Milan, Italy. The first pressing sold out in two months. Revolutionary Snake Ensemble began taking their show on the road, accepting out of town gigs at NYC's Tonic, the Brooklyn Academy of Music, the Puffin Cultural Forum, and the John F. Kennedy Center for the Performing Arts in Washington, DC. They also began taking their show on the rail. Beginning in 2004, in a unique arrangement with Amtrak, America's national rail line, the Snakes began an annual pilgrimage to Mardis Gras on Amtrak's Crescent train, performing their music en route. On arrival, the Snake Ensemble has marched yearly with the all-women Krewe of Muses in their New Orleans Mardi Gras parade. After Hurricane Katrina hit New Orleans on August 29, 2005, devastating the city where countless jazz artists made their homes, the Snakes' pilgrimage assumed a more poignant note.

The Revolutionary Snake Ensemble's 2nd release, Forked Tongue, is their first release on Cuneiform. In the New Orleans brass band tradition, Forked Tongue opens with a traditional New Orleans funeral dirge, “Just a Closer Walk", before exploring more upbeat fare. Containing a total of 12 tunes, the disc showcases a wide range of the Snakes' repertoire. It includes unique arrangements of traditional New Orleans marching music and spirituals and of music by such diverse songwriters as William Broad (aka Billy Idol), Ornette Colemen (this may be the first disc ever to feature music by both Idol and Coleman!), Norman Span, and Jay Livingston & Ray Evans, as well as original material by Field. The album features Field on alto sax, whistles and percussion; Andrew Hickman on tenor saxophone, Jon Fraser on trumpet, Lennie Peterson on trombone, Kimon Kirk on acoustic bass, and on drums and percussion, both Eric Paull and Phil Neighbors (who also contributes electric bass). Guest musicians include vocalist Gabrielle Agachicko performing Field's stunning minor key arrangement of the traditional classic “Down By the Riverside." Other guests include Karen Aqua (djembe, tambourine), Andy Pinkham (electric bass), and Jesse Williams (bass). Recorded in 2006 at Boston's Mortal Music Studios by engineer/owner Andy Pinkham, it was remixed by Minneapolis' Balanced Productions and mastered in Los Angeles by Bob Demaa.