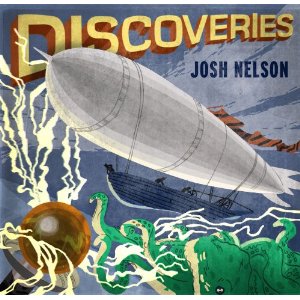 From the album: Discoveries (Steel Bird Music) by Josh Nelson

About the album/track: “Dirigibles" is a composition from Josh Nelson's new album Discoveries. Citing Herbie Hancocks 'Speak Like a Child' and 'The Prisoner' as major influences for the overall vibe of this project, Nelson also points to visionary writers Jules Verne and H.G. Wells as cornerstones for this project. “This record was definitely inspired by some of my childhood and ongoing obsessions with early sci-fi steampunk imagery that comes out of Jules Verne's writing, H.G. Wells writings and movies like The Time Machine and 20,000 Leagues Under the Sea. And I'm trying to manifest all of that into a jazz record." 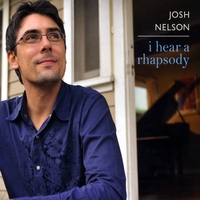 From the album: I Hear a Rhapsody (Steel Bird Music) by Josh Nelson

About the album/track: “Bhutto Song," from I Hear a Rhapsody

Already an accomplished pianist (he was a 2006 Thelonious Monk Competition semi-finalist), Nelson is emerging as a promising composer-arranger on the West Coast scene. And while his solo piano meditations on Discoveries may invite comparisons to Brad Mehldau and Ethan Iverson, his writing throughout this ambitious release ranks alongside the work of such East Coast counterparts as Darcy James Argue and John Hollenbeck. A great admirer of composer-arrangers like Maria Schneider and Bob Brookmeyer, Nelson aspires to that lofty level with some very thoughtful and evocative writing on Discoveries.

Citing Herbie Hancock's “Speak Like a Child" and “The Prisoner" as major influences for the overall vibe of this project, Nelson also points to visionary writers Jules Verne and H.G. Wells as cornerstones for this project. “This record was definitely inspired by some of my childhood and ongoing obsessions with early sci-fi steampunk imagery that comes out of Jules Verne's writing, H.G. Wells' writings and movies like The Time Machine, which is based on Wells' book, and 20,000 Leagues Under the Sea, based on Verne's book. And I'm trying to manifest all that stuff into basically a jazz record, more or less."

Other influences do come into play on Discoveries. The majestic opener, “Atma-Krandana," is Nelson's attempt to capture in music the essence of that Vedic phrase meaning “a crying of the soul." Vanessa Robaire adds an ethereal quality with her wordless vocals on the luminous melody while trombonist Ferber and trumpeter Winslow engage in some cascading exchanges before Nelson and Koonse take up some spirited call-and-response. “Sinking Ship," an affecting piece marked by descending harmonic motion, was written (or “discovered") by Nelson while hiking in Bryce Canyon National Park in Utah. “I happened upon a mesmerizing natural rock formation called the Sinking Ship," he explains. Ferber turns in an exhilarating, freewheeling trombone solo here, fueled by Schnelle's dynamic touch on the kit, while Nelson responds with a potent solo of his own.

Some of the steampunk imagery that the composer alluded to is manifested on the gentle, ruminative “Dirigibles," which has Walsh carrying the poignant melody on bass clarinet and also features Koonse on nylon string guitar. Nelson adds that this piece was specifically inspired by steampunk visuals. “I was always fascinated by Verne's Island at the Top of the World, where you have these crazy floating cities filling up the sky. And what came out of that is this tune with a more serene vibe, trying to capture that feeling of flying high above the landscape and taking everything in from above." Nelson's solo piano piece “Tesla Coil," a virtuosic showcase of counterpoint named for one of the discoveries made in the late 19th century by the enigmatic inventor Nikola Tesla.

The title track, an affecting ballad underscored by Schnelle's gentle brushwork, is Nelson's homage to all the inventors, writers and dreamers who were able to deliver their vision to the world and influence us all in our daily lives. Winslow contributes a killer high-note trumpet solo here. “I was looking for a Johnny Coles type trumpet solo and I told Dontae, 'Man, check out 'I Have a Dream,' the first track on Herbie's The Prisoner.' And he totally got the vibe. Dontae sounds great no matter what he does, but I love giving musicians, especially guys I haven't really recorded with before, a little direction as far as what I was looking for. But Dante's got a cool approach and the tune came out really well."

The evocative “Memorial" is fueled by Schnelle's aggressive industrial backbeat. “That's an older tune of mine that I thought I'd re-record," says Nelson. “It's actually on a record that I did in 2007 with violinist Ludvig Girdland called Friends...Forever. It's a kind of tribute to some of the ideas and inventors of machinery. I like revisiting older tunes sometimes and doing something different with them. The original version of this tune had none of that big drum stuff, it was much more just piano, bass, violin with the drums playing brushes." The evocative “Jogging Day" chugs along with heartland momentum as Robaire, Walsh and Nelson offer plaintive solos. “I actually composed this while jogging in Long Beach," says Nelson. “The driving eighth-note rhythm emerged from my jogging pace and tempo that day. And I thought it would be a nice addition for Alan Ferber to arrange it. He's an amazing musician and does some great writing and arranging for his own nonet, so he ended up putting some of his magic on it with the orchestration of the horns, which I really enjoyed." Walsh turns in a particularly stirring bass clarinet solo here. “Brian has an amazing range on that instrument," says Nelson. “He can make it sound like a Bflat regular clarinet when he's up high, and of course down low it sounds so rich and full."

The sparse solo piano interlude “ Wells, Verne and the Magic Lantern" continues the steampunk theme that runs throughout Discoveries. “I imagined a fictional meeting of Jules Verne and H.G. Wells, if they were born and hanging out in the same timeframe...of course, Jules was around much earlier than H.G. Wells. There are three distinct parts of this tune—the first part is the Wells theme, then the more triplety moving harmony part seems to be more evocative of the Jules Verne kind of energy. And then they kind of come together and mix in the last movement as they're maybe eating popcorn watching a movie together on the magic lantern, which is, of course, merely a movie projection device."

The fugue-like “Weena (Love Theme from The Time Machine)" is a reduction of Russ Garcia's orchestral version from the soundtrack to that 1960 film based on the H.G. Wells story. “This is one of the themes from one of my favorite movies, with Rod Taylor and Yvette Mimieux. Originally it was for string orchestra and some horns, so it was a little challenge to whittle it down to a smaller group and have it have the same effect or same feeling when you're listening to it."

The jaunty swinger “Griffith Park Promenade" was inspired by the green space where Nelson goes hiking near his home in Los Angeles and musically was influenced by Herbie Hancock. As Nelson explains, “ There's a track off The Prisoner called 'Fire Water,' I was always kind of interested in writing a response piece to that tune. It's another one of those tunes where the melody just kind of emerged while out in the mountains, just hanging out in this beautiful park that's been around since 1896. It's one of the country's oldest land grants, which this guy (Welsh-American industrialist- philanthropist Griffith J. Griffith) gifted to Los Angeles. And it's just an amazing place with all these trails and history. And, of course, the famous Griffith Park Observatory is there. I hike there regularly, so it's definitely a meaningful place for me, as far as that connection to some of the themes on the record."

Nelson concludes with the whimsical solo piano piece,"Ode to a Zoetrope." As he says, “It seemed like a fitting ending to the record. Some people are confused by that term 'zoetrope.' It's basically an old animation wheel, a 19th century optical toy. It's one of the earliest forms of animation and harkens back to a bygone era. It's a nostalgic object. So I look at this tune as almost bittersweet, a yearning for the past...maybe for the more analog days when things were a little more simpler and somehow made more sense. So I don't get a feeling of triumphant success to end the record. To me, it's more nostalgia and maybe wishing things were a little simpler or the way they used to be. That was kind of the feeling I was looking for to leave the listener with at the end of the record."

All the moving, meaningful music heard on Discoveries adds to the burgeoning repertoire of this promising young talent deserving of wider recognition.