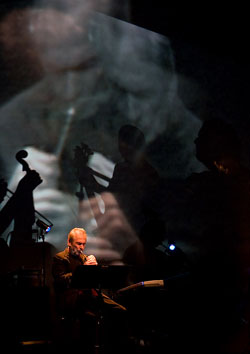 slideshow
Learn more about Jon Hassell, then download three free tracks (see below), including one from his latest release Last Night the Moon Came Dropping Its Clothes in the Street on ECM Records. Enjoy!

Composer/trumpeter Jon Hassell is the visionary creator of a style of music he describes as Fourth World, a mysterious, unique hybrid of music both ancient and digital, composed and improvised, Eastern and Western. In the last two decades, his connoisseur recordings, built around a completely unique “vocal" trumpet style (developed in studies with Indian vocal master, Pandit Pran Nath) have inspired a generation of collaborators like Brian Eno, Peter Gabriel, Kronos Quartet and Ry Cooder. His trumpet performances show up on records of world stars like Bjork, Baaba Maal, and Ibrahim Ferrer. Film and theater credits include scores for Wim Wenders (Million Dollar Hotel, with Bono), The Netherlands Dance Theater (Lurch), Peter Sellars (Zangezi), and the theme for the hit TV show, The Practice.

Montreal, Milan and Paris concerts became the raw material for magical transformation in the 2005 release, Maarifa Street / Magic Realism 2--another difficult-to-define musical fantasy stretched across geography and time, as was its 1983 namesake, Aka-Darbari-Java/Magic Realism.

In 2005, Hassell began touring with a new band, which he named Maarifa Street, playing to new European audiences from Norway to Madrid to Rome to Berlin who are astonished at the discovery of this atmospheric music which defies category: in France, Playboy writes, “this celestial jazz is amazing"; About his performance at the Vienna Kunsthalle, the cathedral of classical, Der Standard raves, “the concert of the year."

In Tsegihi, a choral work for 100 voices and chamber group was premiered in the 11th century Norwich Cathedral in May 2008.

In early 2009, a reconnection with the prestigious ECM label with a new CD release and a “Return to USA" tour--from New York's Zankel Hall to Royce Hall in Los Angeles--signal the growing awareness of a master musician and a music without borders whose freshness comes increasingly into focus as time passes.

Jon Hassell: Fourth World and Balancing the North and South of You