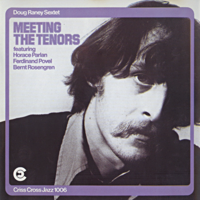 slideshow
In April 1983, guitarist Doug Raney, son of guitar great Jimmy Raney and a stunning player in his own right, assembled quite a sextet at the studios of Criss Cross Records in the Netherlands. Joining Raney were two tiger tenor saxophonists—Dutch player Ferdinand Povel and Swedish hornman Bernt Rosengren, who doubled on flute. In the rhythm section were the American expatriate Horace Parlan on piano, the Danish bassist Jesper Lundgaard and Norwegian drummer Ole Jacob Hansen.

Recorded in Monster, Holland, which is perfect enough, the tracks were Up in Quincy's Room, Blues for Bart, Waltz Number One, Arrival, Lover Man and The Night Has a Thousand Eyes. By the date of this recording, Raney had been living in Europe for 16 years. He had worked often in Holland with Povel. When he relocated to Copenhagen, he bonded with Rosengren. Both musicians were Raney's kind of saxophonists—hard-charging and swinging, with assertive tones that had a bite. In the spring of 1983, when Raney was offered a 10-day tour through Holland, Belgium and France, he formed a group with the reed players out front.

The playing all around is sensational. You can tell Rosengren apart from Povel because his tenor has a deeper tone. On Up in Quincy's Room, Povel takes the first solo. On Blues for Bart, Povel goes first. Rosengren is on flue on Waltz Number One, and Povel solos first on Arrival. Lover Man features Rosengren first followed by Povel, who is first out of the gate on The Night Has a Thousand Eyes. All of the musicians act as a clutch of darts hurled at the wall. All hit their target and the united impact is equally exciting.

Both Povel and Rosengren are around today and remain among the finest tenor saxophonists in jazz. Lundgaard is around as well.