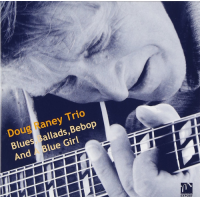 slideshow
For some reason, the best jazz albums are impossible to find—at sane prices, of course. There are plenty of mediocre ones out there—and many are re-issued over and over and over again through the years. But the real gems seem to disappear fast, and I'm not sure why. Perhaps it's because they're recorded by smaller labels in smaller studios in smaller countries and the labels run out of product faster. Or someone with a long gray beard goes around buying all of the copies so no one else can have them. Who knows.

Albums that fit into the “great, but gone" category are all of Maynard Ferguson's Roulette albums from the late 1950s and early 1960s, Special Brew by Ib Glindemann and His Orchestra in 1957 with Bill Holman arrangements, and Bill Watrous's In Love Again (1967). This is just the tip of the lost-album iceberg, and every jazz fan has at least a dozen personal favorites on their lists that they've been looking for without success.

Add to the wish list guitarist Doug Raney's last known studio leadership album—Blues Ballads Bebop and a Blue Girl, for the Japanese Marshmallow label recorded in Copenhagen in April and May 2008. The album featured Doug Raney (g), Jesper Lundgaard (b) and Morten Lund (d). It's one of my favorite jazz guitar albums ever recorded.

Raney, the son of guitar great Jimmy Raney (above), died May 1 of this year. What makes this album special is it's hushed and tasteful execution. It's so quiet and gentle you'd think the microphones were hidden in Raney's bedroom while he played the guitar chords for himself sitting on his bed. The chord voicings and swing are unreal.

The songs on the album are Oblivion, Blue Monk, This Is New, Little Girl Blue, Photograph, Dear Old Stockholm and Who Cares. Each track—both the ballads and the swingers—have a gentle intensity. But what's really special about Raney's treatment are his chords. His melody lines set up these thick, meaty note packages that sound gorgeous. One senses he took special delight in his playing, listening to his chords how they rang like a bell, and the harmony lines he ran between them like Christmas lights.

Doug Raney was an exceptional player with enormous sensitivity and technique. Sadly, little is nown about him, since he spent most of his career in Copenhagen. Sadly, or fortunately, Blues Ballads Bebop and a Blue Girl was Raney at his very best. Hopefully someone someplace will re-issue it soon.

JazzWax tracks: You'll find Blues Ballads Bebop and a Blue Girl here, selling for between $57 and $75.