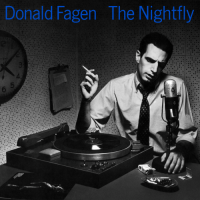 slideshow
Donald Fagen loves jazz. Since 1972, his songs co-written with Steely Dan co-founder Walter Becker have been laced with jazz references and chord voicings. The same goes for Donald's four solo albums. Jazz greats such as Wayne Shorter, Phil Woods and Pete Christlieb, to name just a few, have been featured on Steely Dan and Donald's recordings. And when he's at home with down time, Donald tells me he's often at the piano doing Red Garland imitations. “Have you heard Red's Soul Junction?" he asked me recently “It's like Coltrane was let out of a cage." Oh yeah.

Earlier this month, Donald invited me up to Woodstock, N.Y., to hear him rehearse his new summer backup band. Starting Aug. 3, Donald and the Nightflyers will begin a two-month tour of the U.S. and Japan. Though Walter wanted a light summer, Donald said, he still wanted to tour. So I rented a car, grabbed Donald's solo CDs for the ride, and drove two hours north to the Catskill Mountains. Music writers rarely get this type of access to Donald, and the experience was electrifying, to say the least. The results of my trip and interview are in today's Wall Street Journal.

When I arrived at the Levon Helms Studios in the woods of Woodstock, there were just a few cars parked in the gravel driveway. Inside, I could see Donald and the five Nightflyers out on the back porch through the glass door. Donald stuck his head in. “Marc? Come on out."

On the spacious back porch, the band was taking a break from a day-long rehearsal. Four of the five guys are in their 20s— guitarist Connor Kennedy, organist Will Bryant, bassist Brandon Morrison and drummer Lee Falco. Only Zach Djanikian, the newly added saxophonist, guitarist and harmony singer, is 32. Introductions were made, and five minutes after some small talk, the guys went back inside to their instruments.

Inside, Donald invited me to sit on a metal folding chair about 20 feet from the band. He sat behind a Yamaha electric keyboard, and for the next two hours, the band rehearsed 10 songs: Four of them (Miss Marlene, Green Flower Street, Countermoon and New Frontier) were from Mr. Fagen’s solo albums. The band also dipped into the Steely Dan songbook (Green Earrings, Bad Sneakers, Home at Last and Dirty Work) and they covered the Rolling Stones’ Beast of Burden and the Beatles’ I’ll Cry Instead.

It was mind-blowing, as you can imagine. First, the Nightflyers (named after Donald's first solo album, The Nightfly, in 1982) are young, polite long-haired monsters. They know Donald's music inside and out and they bring enormous energy, power and freshness to the material. Second, Donald is one of the finest singer-songwriters of the post Lennon- McCartney era, at least for those listeners with jazz-soul ears. And third, the music doesn't get any more intimate than listening to Donald and five great musicians at work. We were the only ones in the room.

Here are a few things that didn't make it into my WSJ piece...

Q. At home, do you ever sit at the piano and play in the style of Red Garland?

A. Yeah, I amuse myself doing Red Garland imitations. I can’t quite do all the things he did on the keyboard. He had an amazing sense of time and, of course, he could break into a block-chord style that was similar to Milt Buckner, who first started doing that.

Q. Is there a difference between your solo songs and your Steely Dan work?

Q. Most audiences sing along with you in concert, but they’re often singing the wrong words. Is that a problem?

A. Yeah, actually that’s not my favorite thing when they sing along. I mean I want them to enjoy the show however they can, but there’s something faintly disturbing about the whole audience singing along with you. It has this fascist tinge (laughs).

Q. You really enjoy playing and singing your songs. What are you enjoying most?

A. When I’m playing, it’s space in which I can be free. The truth is I don’t really like singing that much. I think I’m not really a natural performer as a signer. I guess being a jazz fan, my idea of a great singer is someone like Billy Eckstine. Some guy with amazing pipes and tone. I don’t know if I fully accept myself as a, quote, singer. I have to work really hard to sing. I’ve had friends like Phoebe Snow and Mike McDonald. Singing seems to come so naturally to them. For me, I feel like I have to put a lot of energy into singing to sell it.

Q. Watching you from behind for two hours, I noticed you like to let your left arm fly up and come down on the keyboard as if it’s made of marshmallow.

A. It’s funny, that’s true. I get that rubbery feeling when I’m playing. But I’m not thinking about it. It’s almost supernatural. I wonder if other players have that feeling. Thelonious Monk sounds rubbery to me. He can play in between the notes. John Bunch had that feeling. It’s just pure intuition. Since I wasn’t musically trained as a child, I had to make it up myself. When you do that, it’s more an expression of your personality. Blues players like Jay McShann give you that feeling. Basie and Bud Powell, even though he had impeccable technique at the top of his game. Monk plays with his elbows sticking out at right angles to his body. It’s like any country blues player.

Q. What are you most proud of about your music?

A. Aside from the actual songs and material, I’m proud that I introduced a lot of people to jazz. We were a kind of bridge to fans eventually becoming jazz fans. Since the bebop era, jazz hasn’t been exactly the most popular American music. I think by having so much jazz in what we do by hiring guys like saxophonists Phil Woods and Wayne Shorter, our fans wanted to hear more of those guys. Walter and I owe so much to all those jazz players.