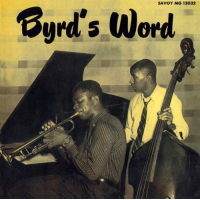 slideshow
Blue Note's art direction in the early 1950s was so compelling and future forward that we often forget that Savoy also recorded a significant number of knockout albums during this period. Donald Byrd's By rd's Word is a prime example. Recorded for Savoy in September 1955 and produced by Ozzie Cadena, the album featured a killer quintet—Donald Byrd (tp), Frank Foster (ts), Hank Jones (p), Paul Chambers (b) and Kenny Clarke (d).

The album was Byrd's second album as a leader (his first, By rd Jazz, was recorded for Detroit's Transition label a month earlier). On By rd's Word, the songs were a mix of originals and standards. Winterset was by Foster while Byrd penned Gotcha Comin and Goin' and Long Green. Also included on the album was Star Eyes, Someone to Watch Over Me and If I Love Again, though the last song was left off the original release and issued later on CD.

As Cadena points out in the album's brief liner notes, “Donald Byrd came to New York about six months ago and he impressed me so much that I have recorded him on five separate occasions. This is the only one so far under his leadership, and there will be quite a few more to follow—but here he proves his stature as a jazz man. He is very conscientious about his work. He has confidence and he blows consistently and the proof is herein."

A few notes: Dig how a 22-year-old Byrd runs up and down chords in perfectly measured form. Catch Clarke's syncopation and how he works the snare, particularly on Star Eyes. Foster, who was with Basie at the time, plays free and limber here. Jones is lush and Chambers is rock steady. Byrd and Foster are perhaps best on the ballad Someone to Watch Over Me. The playing is remarkably beautiful.

Cadena was a tasteful producer, overseeing dozens of superb Savoy albums. He also was a tough cookie, having served in the Marines during World War II. Since Savoy was based in Newark, N.J., Cadena was among the first jazz producers to tap into Rudy Van Gelder's recording studio, which was at his parents' home in Hackensack, N.J., in the 1950s. While Cadena didn't have the same vision for hard bop that Blue Note's Alfred Lion did early in the 1950s, he knew how to pair artists and wind up with stunning results.