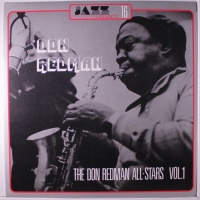 slideshow
Don Redman today is a forgotten giant of the swing era. A saxophonist and percussionist who played with Fletcher Henderson's band and McKinney's Cotton Pickers in the 1920s, Redman's true genius rested in his sophisticated big-band arrangements, starting in the late 1920s. By the early 1930s, he was writing complex dance charts years before the music press began calling the music “swing." Listening to his arrangements from that period today, it's easy to hear how muscular, complex bands of the 1940s led by Stan Kenton and Boyd Raeburn must have been influenced by Redman's writing. For example, here's Redman's arrangement of his original Chant of the Weed, with sections sliding in and out—not with call-and-response motifs but intricate, self-contained architecture...

In the early 1940s, Redman broke up his band to devote more of his time to the more lucrative enterprise of arranging for African-American and white dance bands. In 1945, he wrote this nifty chart of Just an Old Manuscript for Count Basie...

In 1946, Redman formed a band that included tenor saxophonist Don Byas, trombonist Tyree Glenn and pianist Billy Taylor and went off to Europe on tour, becoming one of the first bands to visit Europe following World War II. Here's the band playing How High the Moon in Switzerland in '46 with a solo by Byas...

Several key members of the band left while the orchestra was in Europe, and when Redman returned to the States he broke up what was left of it to focus again on arranging. In 1952, he wrote this knockout arrangement for Basie just after Basie formed his so-called New Testament band. It's Jack and Jill, with Marshal Royal on clarinet in the reed section and a hip solo by Eddie “Lockjaw" Davis. Dig the stop-time measures and crazy run-down at the end...

The reason I'm getting into this much detail is to set up what I want to tell you next. In 1957, Redman assembled a dynamite band and recorded a transcription album for Sesac in New York called Don Redman All-Stars. For those not in the know, a transcription recording was typically an oversized disc recorded exclusively for radio airplay. In this case, the transcription featured songs licensed by the Society of European Stage Authors and Composers (Sesac), a performing-rights organization akin to ASCAP and BMI. All of the Redman songs here would have been licensed by Sesac, and the transcription was offered to radio stations for broadcast. Sesac would then earn airplay royalties on the songs.

Redman's transcription was the first in a series that Sesac produced between 1957 and 1963 featuring Duke Ellington, Elliot Lawrence, Will Bradley, Bobby Hackett, Cannonball Adderley, Count Basie, Billy Taylor and Kai Winding. (A label today might want to feature them all in a set called The Complete Sesac Sessions.)

Redman's originals here swing, and his arrangements are dazzling and relentlessly interesting. The solos are all tasteful, particularly the ones by Coleman Hawkins.

JazzWax tracks: You're in luck. I found the Don Redman All-Stars transcription broken into two parts—volumes 1 and 2. You'll find the albums here and here as downloads. For more in the same vein, dig Redman's Park Ave. Patter. You'll find it on Don Redman and His Orchestra: At the Swing Cats Ball (Fresh Sound). The CD include tracks from Vol. 1 of the previous session (go here).