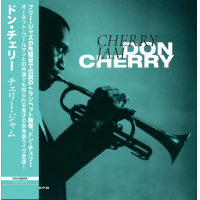 slideshow
Throughout his career, Don Cherry favored the stubby but warm pocket cornet and was most closely identified with the free jazz and avant-garde jazz movements. In the late 1950s, he recorded with Ornette Coleman (Something Else!!!, Tomorrow Is the Question!, The Shape of Jazz to Come, Change of the Century, This Is Our Music), Paul Bley (The Fabulous Paul Bley Quintet) and John Coltrane (The Avant-Garde). In the '60s, he recorded additional albums with Coleman as well as with Steve Lacy and on the road with Sonny Rollins before leading his own recording sessions in 1963. Then he formed the New York Contemporary Five.

On tour in late 1964 with tenor saxophonist Albert Ayler and then pianist Dollar Brand at the start of 1965, Cherry wound up in Copenhagen. That October, he jammed on four songs for a Danish radio broadcast, backed by Mogens Bollerup (ts), Atli Bjorn (p), Benny Nielsen (b) and Simon Koppel (d). After, he flew back to New York and recorded Complete Communion for Blue Note with Gato Barbieri (ts), Henry Grimes (b) and Ed Blackwell (d). Then he returned to Europe and a Copenhagen residency until 1968. Going forward, he bounced back and forth between New York and Europe, where he found plenty of work and appreciative audiences.

Now, that four-song Copenhagen jam session in '65 has been released on an EP as Cherry Jam on Japan's Gearbox Records. The music is significant for its bright avant-garde abstraction and cohesiveness as well as the political subtext. Taken from radio-station tapes, the sound is fantastic. The jam was performed on Danmarks Radio, Denmark's national radio station. The songs were Cherry's The Ambassador From Greenland, Richard Rodgers' You Took Advantage of Me, Cherry's Priceless and Alvin Batiste and Cherry's Nigeria.

This recording seems to be the highlight of the other musicians' careers. As good as Bollerup was here on saxophone, his only other jazz recording came in 1969 as a sideman on a Copenhagen date led by John Tchicai. Koppel was on that session as well. Bjørn and Nelson recorded on an single obscure session in 1970 but that was it. Koppel would record on an additional bunch of sessions in '70s and '71 and then dropped off the recording radar until 1997. It's hard to know why these musicians weren't recorded more. Perhaps they simply went on to teach or played in jazz orchestras that weren't recorded, leaving the studio behind.

What's especially gratifying about Cherry Jam is you can hear the broad, blistering influence of trumpeter Clifford Brown on Cherry. Cherry's family had moved to Los Angeles in 1940 from Oklahoma. While Brown was in L.A. with Max Roach in the summer of '54, Cherry attended a jam session held by Brown and drummer Larance Marable at Eric Dolphy's house. Afterward, Brown took Cherry under his wing for a time. As you can hear, Cherry remains woefully underappreciated in the U.S. This album is a solid entry point. [Photo above of Don Cherry by Francis Wolff (c)Mosaic Images]