SOURCE: TWO FOR THE SHOW MEDIA
October 16, 2008
Sign in to view read count 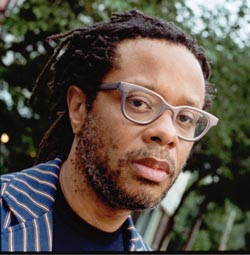 slideshow
For almost two decades, Don Byron has been a singular voice in an astounding range of musical contexts, exploring widely divergent traditions while continually striving for what he calls “a sound above genre." As clarinetist, saxophonist, composer, arranger, and social critic, he redefines every genre of music he plays, be it classical, salsa, hip-hop, funk, klezmer, rhythm & blues, or any jazz style from swing and bop to cutting-edge downtown improvisation.

“Calling Don Byron a jazz musician is like calling the Pacific wet – it just doesn’t begin to describe it... Byron has carpentered an extraordinary career precisely by obliterating the very idea of category.” –TIME Magazine

“...showing us new ways of thinking and feeling about familiar experiences is one of the tasks of the true artist and is something Byron revels in.” –The Times, London